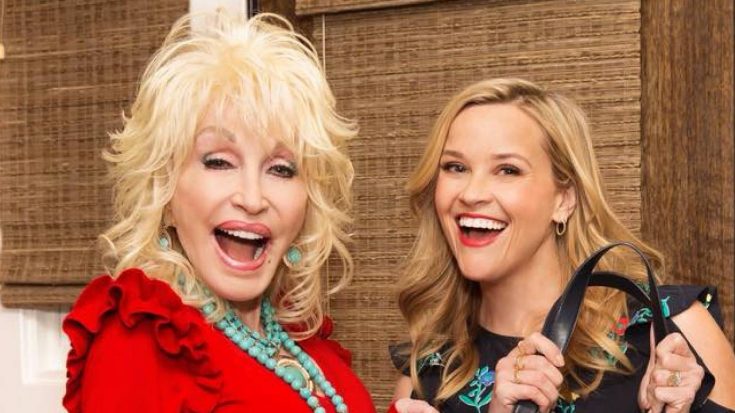 In a unique and magical way, June Carter Cash and Dolly Parton recently shared a sweet duet, and it’s all thanks to Reese Witherspoon.

In conjunction with her production company, Hello Sunshine, the Big Little Lies actress just launched a new on demand channel with DirecTV which, according to the website, “features a selection of original series and movies that feature women at the center.”

Witherspoon is hosting one of those shows herself and it is titled Shine On with Reese.

“I had this idea to do a show about women that I really love, admire,” Witherspoon revealed in the show’s previews. Those women include professional athletes, actresses, cooks, singers, humanitarians, and so many more.

THIS is why #ShineOnWithReese is so important to @reesewitherspoon ? First up: @dollyparton, because who else? Catch the show on @directv and @directvnow… and watch the first episode now (it’s FREE!) at the link in bio ?

The very first episode featured one of the people Witherspoon looks up to most – Dolly Parton. The country icon took Witherspoon, who won an Oscar in 2006 for her portrayal of June Carter Cash in the Johnny Cash biopic Walk The Line, on a tour of her house, including her closet filled with glittered ensembles, drank spiced tea, and chatted about her life as a pioneer for women in country music.

I'm so proud to be the first guest on my friend @ReeseWitherspoon's new show with @hellosunshine! Seriously y'all, nothing beats great friends, good conversation, and delicious spiced tea. Don’t you agree? You won't want to miss what we talked about! Watch my episode on #ShineOnWithReese coming July 17 to @DIRECTVNOW!

At one point, Parton showed Witherspoon her famous guitar that is styled after the coat of many colors her mama gave to her when she was a young child. She often plays the song she wrote about that coat, “Coat of Many Colors,” on this particular instrument.

Parton began singing her iconic 1971 hit, and Witherspoon joined in, perfectly matching the country legend’s pitch. It’s no surprise that Witherspoon can hold her own in the singing department, seeing as she did all of her own singing in Walk The Line.

“That was so magical, I’m gonna cry,” Witherspoon said after the duet, and immediately freaked out when Parton told her she could hold the guitar!

Watch Witherspoon and Parton’s sweet duet to “Coat of Many Colors” in the video below, and check out the full first episode for free here.

Still not over this moment! Pinch me! ✨ Thank you @DollyParton for the warm welcome into your home! #DreamComeTrue (P.S. You can watch Dolly’s full #ShineOnWithReese episode for @hellosunshine for free via the ? in my bio)