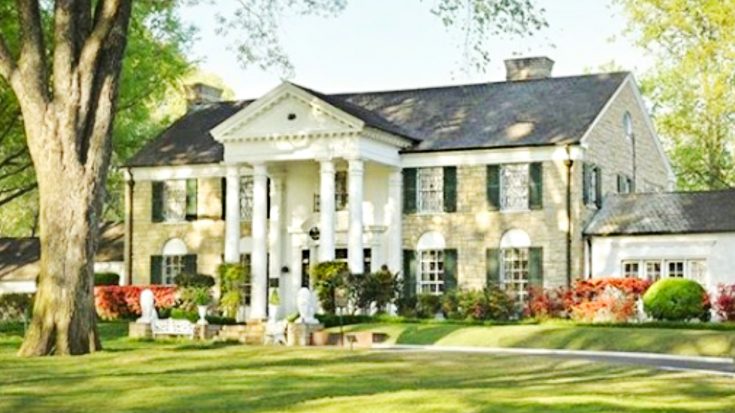 Ever since it has been open as a tourist attraction, Elvis Presley‘s Graceland estate has welcomed millions of visitors from around the world. The centerpiece of the estate has always been Elvis’ mansion, and that’s something that will never change.

But over the years, Graceland has undergone a series of changes and additions that have transformed it into the booming tourist destination it is today. One of the most recent additions is a new hotel, called the Guest House at Graceland.

You can feel Elvis’ influence in every inch of the  450-room resort. Although it hasn’t been open for long, the hotel has already been a go-to spot for newly married couples to stay and take photos.

At the Guest House at Graceland, the staircase, modeled after the one in Elvis Presley’s home, is one of the most photographed features of the hotel. We love this view that @maddie_moree took of Paul and Holly. #wedding #luxuryhotel #elvis #graceland #classic #iconic #brideandgroom #weddinginspiration #weddingplanning #destinationwedding #happilyeverafter #ido #inlove

There’s another upcoming addition to Graceland that Elvis-loving couples are sure to fall head over heels for as well!

On Wednesday (July 18), Graceland was happy to announce that the grounds will soon look a little different. And that’s because a new wedding venue is about to open there!

For the past 18 years, the Graceland estate has been home to a quaint wedding venue called the Chapel in the Woods. After hosting nearly 2,000 weddings and vow renewels, the original chapel underwent a major makeover, and is now entirely new.

A press release from Graceland describes the new Chapel in the Woods like so:

“The all-new chapel features modern design and architecture by HBG Design, who previously collaborated on the design of The Guest House at Graceland. Maintaining the intimate feel, 75 guests can be hosted at this charming new location.”

The venue will open with a grand celebration of love during Elvis Week in August, with the press release stating it will be “featuring couples whose love were inspired by Elvis, whether on a visit to Graceland or during Elvis Week.”

On August 13, one wedding and ten vow renewals are set to take place at the new venue. Couples who would like the chance to renew their vows at the new chapel can do so by following these steps:

Catch a photo of what the new Chapel in the Woods looks like below.

We are excited to announce an all-new wedding venue at Graceland! The new Chapel in the Woods will officially open during Elvis Week, and we’re hosting a special wedding and an amazing 10 vow renewals on Graceland’s Day of Love, August 13. To commemorate the Day of Love, we are looking for couples who met at Graceland or Elvis Week who would like to take part in the group vow renewal on August 13. Learn more about the vow renewal ceremony and the new chapel on Graceland.com! . . . . . #elvis #elvispresley #elvisweek18 #elvisweek #chapelinthewoods #chapel #wedding #weddingvenue #dayoflove #love

What do y’all think of Graceland’s intriguing new addition? Would you like to have a wedding or vow renewal ceremony there? It sure looks romantic!