10 Days After Wife’s Death, Hank Jr. Returns To Stage With The Help Of His Kids 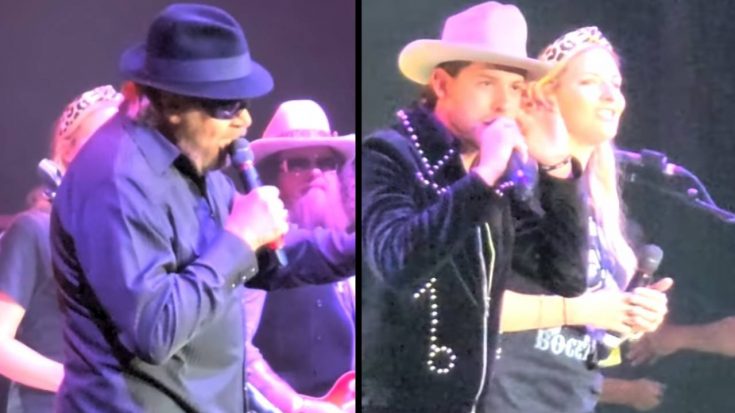 It was reported that she “was transported to a local hospital where she was pronounced dead.”

Sam is devastated about his mother’s death. On March 23, he shared a statement with CMT, which read:

“Now she gets to radiate from above with my sister Katherine Diana right by her side. She grew up competing in baton and cheerleading and was one of Hawaiian Tropic’s top models. My father fell in love with the Daytona Beach beauty the minute he set eyes on her in the early 80s. They went on to live the most powerful love story of travel and hunting and raising a family…”

On March 28, Sam shared a touching tribute to his mom on social media. The tribute contained a slideshow of photos showcasing Mary Jane and her family through the years. He wrote, “I will always be the son of Mary Jane. RIP MAMA. I love you forever. Miss Spruce Creek High School, Miss Hawaiian Tropic, Miss Mary Jane Williams, my mama forever my everything.”

He wrote, “Thank you for all your thoughts and prayers during this time. The family has encouraged me to perform this weekend. Not only is it healing but I do not want to disappoint my fans who have purchased tickets.”

Hank Jr. was scheduled to play at Landers Center in Southhaven, Mississippi on Friday, April 1. Like he said he would, Hank Jr. performed for a packed house at the Landers Center, with the help of some very special guests – his children.

In the middle of his set, his middle daughter, Holly, and his youngest son, Sam, joined him on stage for a rowdy performance of “Family Tradition.”

Sam posted a couple photos from the night writing, “I’ve had too many highs and too many lows.”

Hank Jr. played an awesome guitar intro, which neared a minute, before starting the opening lyrics. The crowd took over singing part of the song before Holly and Sam walked on stage with microphones. In the middle of the song, they began singing Hank Williams Sr’s “Hey Good Lookin’.”

The three of them looked like they were really enjoying themselves despite the tragedy they are going through. Watch the video of their performance of “Family Tradition” below.