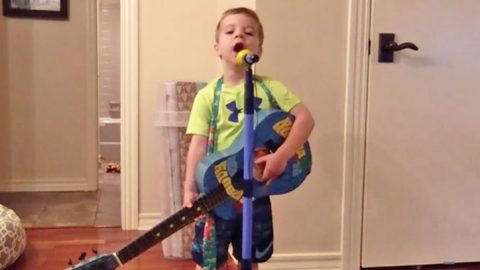 If this isn’t the cutest thing you see all day, we will be shocked. This video proves that real country music fans come in all shapes, sizes, and ages! This tiny tot dedicated his fandom to the one and only George Strait at an extremely young age, three years old to be exact!

Singing into his blue microphone and playing a matching guitar, this toddler, who his mom calls a “threenager” because of his adorable attitude that can be compared to a teenager, belted “Carrying Your Love With Me” at the top of his lungs.

“Carrying Your Love With Me” was the title track, and second single, to Strait’s 1997 album, which went to number one on both the Billboard Top Country Albums and Billboard 200 charts.

The single, unsurprisingly, also went number one, and was voted by the website Country Universe as one of the top 400 greatest songs of the 1990s, and is beloved by fans for its incredibly romantic message.

Carrying Your Love With Me by George Strait gets me everytime!! If it doesn't make you think about spending your life with an amazing signficant other, you are crazy!

The toddler started the song a little timid, but got more comfortable behind the mic while channeling his inner country star. Who knows, maybe this is good practice for a possible future career.

Watch his performance below!