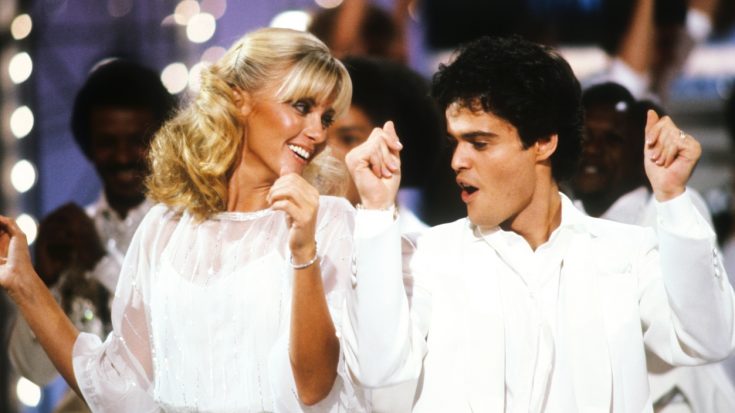 At just 21 years old, this superstar heartthrob was at the peak of stardom with his sister, Marie Osmond, and they hosted their own variety television show called Donny & Marie.

These two musical and entertainment icons often welcomed other famous performers to their variety show for duets, ensembles, and a whole lot of great fun! One of their most memorable guests was the ever-precious Olivia Newton-John!

Just months after the worldwide release of Newton-John’s magical musical movie, Grease, she joined these two effervescent entertainers as part of their evening show on September 22nd, 1978 – and she lit up the stage alongside Donny with a bubbly rendition of the movie’s hit song.

Grease, which co-starred John Travolta, was just another step in the ladder to success for Newton-John and cemented her in the pages of time as one of the foremost triple-threat performers the world has ever come to know.

At this time in 1978, John Travolta & Olivia Newton-John were No.1 with 'You're The One That I Want' for 9 weeks.
I bet you are singing it! pic.twitter.com/spjbCQuJ2b

In this one-of-a-kind variety show performance, Osmond and Newton-John don stark white suits and trot out on stage hand-in-hand as the beginning music of “You’re The One That I Want” begins playing.

The audience claps along and both stars, beaming with smiles, look into one another’s eyes as they belt each line with power and precision!

This is one of the most-fun duets we’ve ever seen and it’s an incredible look into the past with a reminder of what great television shows used to air in the 70s!

Together these two musical icons blew us away with this fun and fiery performance – take a peek below and let us know what you think in the comments below!