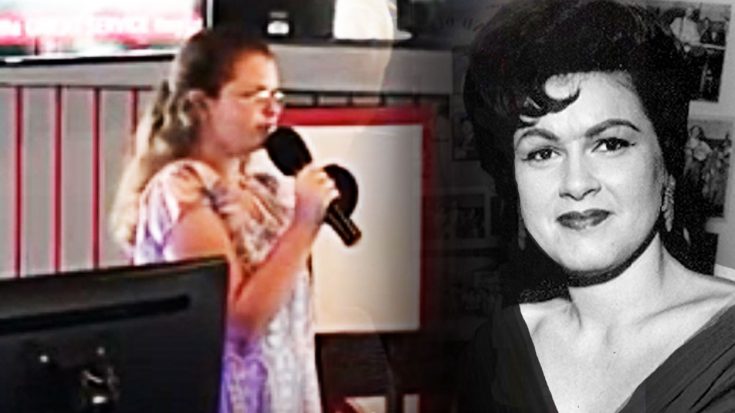 She’s loved country music as long as she can remember – and now she’s making a name for herself singing it in front of crowds all over!

Young Sarah Hardwig is a great example of someone who refuses to let anything get in the way of their dreams – and that’s evident every single time she picks up a microphone.

With our hero in song, Sarah Hardwig! Thanks for the photo, Leah Puttkammer https://t.co/dIx3U3UCwl pic.twitter.com/2JInjqRTao

At just 15 years old, this incredibly talented teenager is legally blind and requires the use of a white cane to get around. But she doesn’t let this stop her from sharing her stunning gift with people.

Hardwig has been following in the footsteps of her idols for some time now and has performed anthems, operas, originals, and cover songs all over Nashville – including at the historic Bluebird Cafe!

In this stunning clip below, Sarah took the stage during a weekly karaoke night at Harold’s Place. While she was younger than many of the other patrons, she proved that she had the vocal talent of someone who had been singing for decades.

Didn't get in but got Sarah a t-shirt

Honoring the legendary Patsy Cline, this young rising star belted out a pristine cover of “Crazy” that captured the entire crowd inside this restaurant. The silence that fell after her first few notes proved that everyone within earshot had stopped what they were doing to find out where this beautiful sound was coming from…and now you will too!

Watch Sarah Hardwig’s cover of “Crazy” below and tell us what you think in the comments.