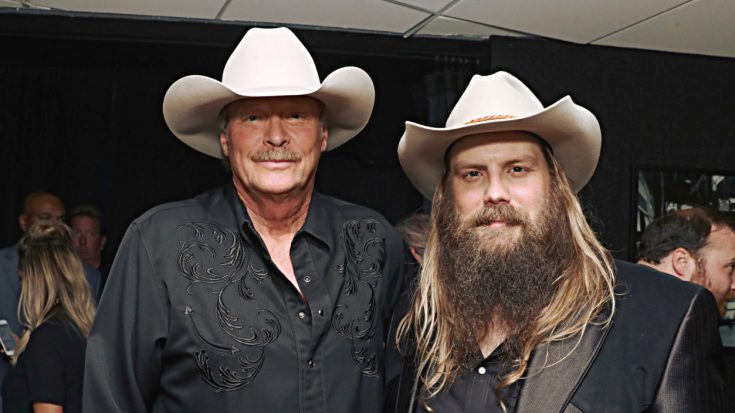 Alan Strives To Keep It Country

When you think of traditional country music, Alan Jackson‘s name is likely one of the first that comes to mind. Ever since he made his way on the scene in 1983, Jackson has made it his mission to create and sing what he and many others consider to be authentic country music.

During an interview for GQ‘s Sultans of Twang series, Jackson said the entire reason he came to Nashville was “to make real country music.” He then went on to explain what country music was like at the time, and how he wanted to change it:

“In the early ’80s it had kinda gotten away from that [more traditional sound]. Some of it was more pop than the stuff they’re making now…I loved all that real stuff, and there weren’t any new guys coming along doing that. And I said, man, somebody’s gotta do that that’s new.”

That’s exactly what Jackson did, and it paid off. Over the course of his career, he has sold over 80 million records worldwide, earned 35 number one hits, and just last year was inducted into the Country Music Hall of Fame.

What He Has To Say About Today’s Big Star

As Jackson said in his interview, country music had a bit of a pop leaning in the 1980s. You’ll often hear the same claim about today’s country music, with many arguing it has strayed too far from its roots and is more of a hodgepodge of musical styles.

But in the midst of such times, there is one artist many have named as a country music’s “savior.” In their eyes, this artist is the one who is making country music country again. That artist is Chris Stapleton.

However, Jackson has a surprising opinion when it comes to Stapleton and his music. You may be shocked to hear this, but Jackson completely disagrees with those who view Stapleton as country music’s savior:

“I mean, even Chris Stapleton—I love Chris, he’s authentic. A real writer. Musician. He opened for me for awhile before he hit so big. I’m a big fan of his. He was a bluegrass singer and has written bluegrass stuff. But what he’s making now really isn’t real country: It’s more like bluesy, Southern rock kinda stuff.“

Even though Jackson believes that Stapleton’s music isn’t quite country as he defines it, he still considers it to be more country than anything else. “I love it, it’s great, but he’s the closest thing to country out there,” Jackson said.

Alan Jackson Says Chris Stapleton Is the 'Closest Thing to Country Out There' https://t.co/i0M9flQ2wl pic.twitter.com/eqsFQkczJ2

Country or not, there’s no arguing the fact that Stapleton’s music is top-notch stuff. Listen to his Grammy Award-winning song “Broken Halos” below to see what we mean.

What do you think about what Jackson had to say about Stapleton? Do you agree with him?