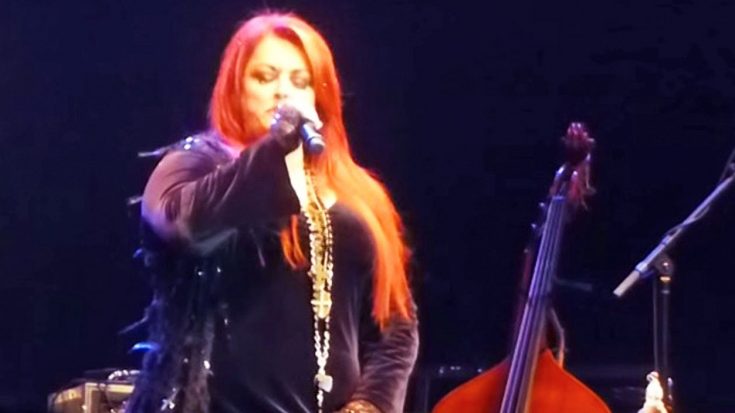 On November 7, 2016, the world lost a great talent when singer-songwriter Leonard Cohen passed away at the age of 82. Out of Cohen’s many great works, he is perhaps best known for the song “Hallelujah,” which surprisingly experienced little success upon its initial release, but has since been covered many, many times by artists such as Wynonna Judd.

Cohen wrote “Hallelujah” to include on his 1984 album Various Positions. The song managed to claim the 20th spot on the US Rock chart, but fell short of the Top 50 on the Billboard Top 100.

As other artists recorded their own renditions, the song’s popularity grew.

Interest in “Hallelujah” soared following its inclusion in the animated film Shrek. The surge of interest has led to over 300 known versions of the song in existence today.

One of those versions was performed by one of country music’s most successful female vocalists…Wynonna Judd. During a Christmas concert in December 2015, Judd stunned the audience when she delivered a haunting rendition of Cohen’s ballad.

With a single guitar player by her side, Judd sat at center stage and took a moment to reflect to herself before she started singing. After nearly a minute of waiting, Judd hit that first note in a chilling moment that’s sure to send shivers up your spine.

Those artists who have been able to pull of “Hallelujah” successfully have done so because of the way they approach the chorus.

Judd managed to pull this off by increasing the volume of her voice through these lines. She would then let her voice explode with a powerful sound before lowering it back down to a whisper-like state in the chorus.

You’ll soon discover that words simply can’t do this performance of Judd’s any justice.

With over 300 renditions, it goes without saying that Judd isn’t the only country singer to perform “Hallelujah.” One of our other favorite versions is by another powerhouse vocalist, LeAnn Rimes.

If you can’t get enough of this beautiful song, be sure to listen to Rimes’ version in the video below. It’s stunning in its own way, and will leave you covered in goosebumps all over again.