Will Colonel Sanders Be At ACM Awards? – Reba McEntire Spills The Beans… 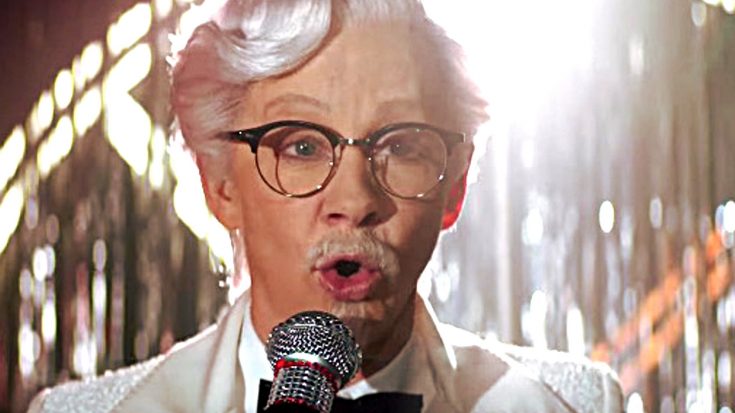 Reba McEntire‘s schedule is busier than ever right now. Here’s just a short list of the many things she has on her plate right now: a Vegas residency, a fashion line, a boot line, a makeup line, plans for a new album, a search for a movie/TV role, and talks over a Reba sitcom reboot or reunion.

On top of all that, McEntire is currently playing the part of one of the most beloved figures in the fast food industry…Colonel Sanders. As the founder and face of KFC, Sanders’ image is recognized worldwide.

Within recent years, KFC has been advertising by having different celebrities play the role of Sanders. In the past, the Colonel was played by wrestler Dolph Ziggler, actor Rob Lowe, and comedian Jim Gaffigan.

McEntire became the first-ever woman and country singer to play Colonel Sanders, and has since appeared in a number of KFC commercials. One hilarious commercial has McEntire playing herself as she sings, before admitting that she can’t take it any longer. Fast as lightning, she yanks off her hair to reveal that she was actually the Colonel playing the part of a country music singer.

As if McEntire already didn’t have enough on her plate, she’s also preparing for one more role, and it’s a big one. After five years, McEntire is returning to host the ACM Awards!

Preparations for the awards are well underway, and you’re sure to be in for a good time with McEntire leading the charge. Her opening monologue is destined to be a source of good laughs, but is it destined to feature a special guest as well?

The folks over at Billboard asked McEntire the question we’re sure many of y’all were thinking when you heard that she would be hosting the ACM Awards. Will Colonel Sanders be making an appearance with her at the ceremony?

This is what she had to say:

“You never know where that rascal is going to show up.  I haven’t packed a white suit. I bet the Colonel is going to stay in Kentucky a little longer. He’s got a lot of work coming on.“

Bummer…sounds like we won’t get to see the Colonel at the ACM Awards this year! Are you disappointed to hear that?

If you are, then cheer yourself up by watching another one of McEntire’s hysterical KFC commercials below. We can never get enough of them!