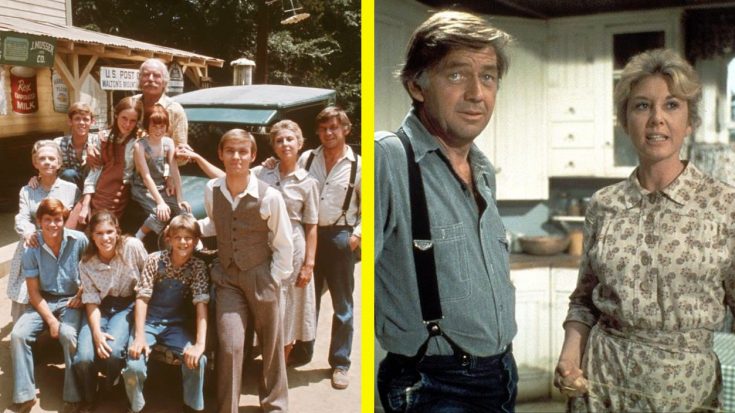 Spanning more than 220 episodes that aired for nearly a full decade, CBS’ own hit TV historical drama The Waltons earned a long list of accolades for its incredible storytelling and performance.

But, according to two of the show’s frontrunners, it could have come to a screeching halt if their affair had been made public…

Michael Learned, the actress who played Olivia Walton, and her on-screen husband Ralph Waite shared nine seasons on television during which they dazzled audiences with their magical chemistry.

While they worked together for nearly a decade, the two built a bond that many never knew that they shared.

A Daily Mail interview reveals the depth of the relationship between them…and why they thought the news of their affair would ruin the show. So they kept it hidden.

Remembering Ralph Waite, who died at 85-y-o on the 13th of February 2014. John Walton in The Waltons 1972-1981, with Michael Learned (now 81-y-o) as Olivia Walton and Richard Thomas (now 69-y-o) as John-boy Walton. Absolutely love the reunion pic. of Ralph/Michael/Richard. pic.twitter.com/PG8n4BCJ2f

The pair had fallen in love, says Learned, and even dated…they had bonded over the divorces each experienced within a few years of starting the show.

When the two became intimate, they also made a pact – fearing that the show would crumble under the pressure of a love affair between them.

“We had a deep love for each other that we would have ruined if we had taken it that extra step, and we didn’t,” Learned told the publication.

At that point, they decided to disconnect romantically…but they became some of the closest friends. She went on to call Waite her “spiritual husband” and revealed how he once saved her life.

Michael Learned and Ralph Waite in “The Waltons” (1971) pic.twitter.com/N1k6eVCl1K

Learned had developed a drinking problem during the early years of the show. Her addiction saw her drinking heavy amounts of bourbon and wine – and it soon became out of control.

Waite, who was a minister before he was drawn to acting, recognized her struggle and stepped in to help her. She doesn’t detail exactly how, but says he “saved her life.”

“He had so many colors to his life and his character and he was deeply honest with himself and God-conscious I think, and complicated. And because we remained the kind of friends we remained, none of that bothered me.”

“But if we’d been married or something, I might have had a problem with his complicatedness and he might have with mine.”

“We’re both very flawed human beings, but I loved him dearly, what can I say? And he loved me.”

The two remained an unshakable pair of friends for many years – right up until his death in 2014.