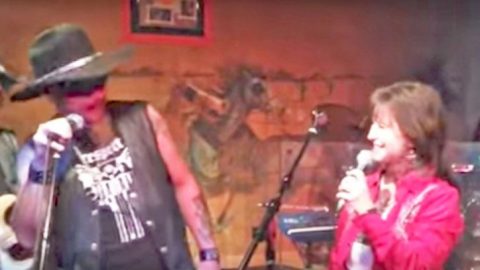 When Whey Jennings was just a young boy, he watched his legendary grandparents perform countless times. His grandparents are none other than Waylon Jennings and Jessi Colter. It was during one of their shows that he fell in love with music, and since then, has been pursuing a music career.

Today is Jessi's birthday!Y'all ready to leave some Happy Birthday messages to the First Lady of Outlaw Country in the comments?

Whey now performs with his band, The Unwanted, and on their official Facebook page, he details the moment he fell in love with music.

“He was just a boy at one of his Grampa Waylon’s shows and his Grama Jessi had just left the stage after singing ‘Storms Never Last’ when she sat her mic in the chair backstage,” his band’s Facebook page states. “Young Whey picked up the mic and pranced out on stage and began singing ‘Mama’s [sic] Don’t Let Your Babies Grow Up To Be Cowboys’. His Grampa then gave a, ‘Hey, hold up there hoss, wait for me’ and went to pickin and when the song was thru [sic] the crowd went nuts and it was on that day that Whey fell in love with music.”

It seems his music career came full circle a couple years ago when his ‘Grama Jessi’ was on hand at one of his shows. He brought her on stage for a heartwarming duet to the iconic song “Storms Never Last”, which she originally recorded with her husband of 33 years.

Waylon and Jessi first released “Storms Never Last” in 1981 off their duet album Leather and Lace and in this new duet, Whey sounds eerily similar to his grandfather.

Jessi and Whey exchange sweet looks at each other throughout the performance that will make your heart melt!