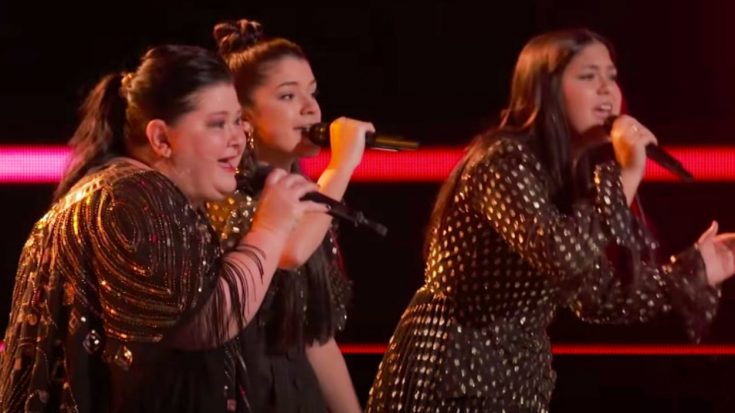 During the Season 19 Voice knockouts, Blake Shelton had two standout country artists compete against each other.

The first competitor was 42-year-old Ben Allen. His Voice journey began when he sang Brooks & Dunn‘s “Red Dirt Road” during the blind auditions. Shelton turned for him within seven seconds, and Gwen Stefani and John Legend also turned their chairs.

Allen ended up picking Shelton as his coach, and went on to win his battle. So as he entered the knockouts, there was a lot of pressure placed on him.

The pressure was extra strong considering who Allen’s competition was…the mother-daughter trio Worth the Wait. They earned a four-chair turn in the blind auditions after singing Linda Ronstadt‘s “When Will I Be Loved.” They ended up picking Shelton as their coach, and like Allen, they won their battle round.

Allen performed first during their knockout. He sang Luke Combs‘ #1 hit “She Got the Best of Me.” As for Worth the Wait, they decided to show off their stellar harmonies on a country classic…”Delta Dawn.”

While “Delta Dawn” has been recorded by dozens of country artists, it is most well-known as Tanya Tucker‘s signature song. It’s nothing short of iconic, so Worth the Wait had some pretty big shoes to fill with their performance.

In the end, both Allen and Worth the Wait impressed their coach.

“Ben, classic country voice, just knock it right out of the park every time,” Shelton said of Allen’s performance.

He also raved over Worth the Wait, discussing how their different voices combine to make an extraordinary sound.

After some deliberation, Shelton picked Worth the Wait as the winner of the knockout. “I think it’s time that a trio makes it to the finale on this show, and I think Worth the Wait’s gonna be the ones,” Shelton said.

For a second, it looked like that was the end of Allen’s run on the show, but much to everyone’s surprise, Stefani chose to use her only “steal” to bring him on her team.

“If I’m ever gonna have a country artist on my team, this is the moment,” Stefani told Allen. “We can do this together alright.”

Tune in to the video below to watch Allen and Worth the Wait’s knockout and all the excitement that happened afterward.