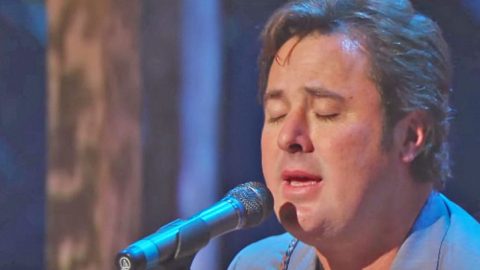 “Go Rest High On That Mountain” is probably Vince Gill’s most recognized song. It is also his saddest. We imagine that performing it takes a lot out of him emotionally and it can’t be easy to sing over and over again.

Gill is a seasoned professional at performing the heartbreaking song, but it still seems to get him every time. In this special performance at Bill and Gloria Gaither’s front porch concert hall, Gill performed his classic song to an audience full of adoring fans.

As he sang the lyrics, you can see tears forming in his eyes. He performed the song with so much emotion that his backup singers were even getting choked up, as well as the entire audience, and us at home.

Gone but not forgotten! We Remember.

He finished the song some years later after his brother passed away of a heart attack. The song won him two Grammy Awards, the CMA for Song of the Year, and a BMI Award for Most Performed Song.

This song seems to get better and better every time we hear him sing it.  Watch the incredible performance below.