Vince Gill Responds To Kelly Clarkson’s Cover Of His Song 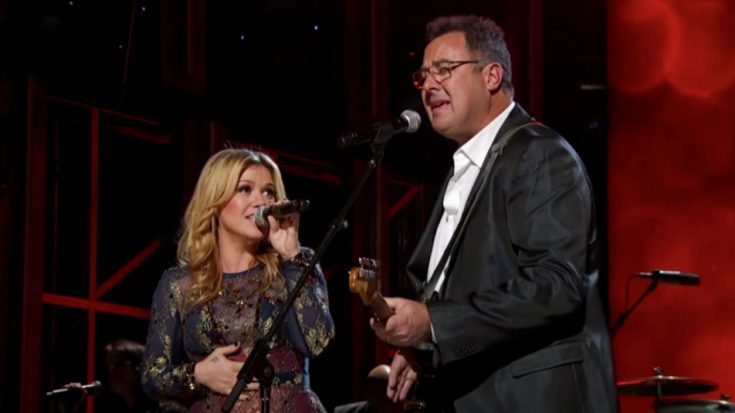 Kelly Clarkson uses the “Kellyoke” segment of The Kelly Clarkson Show to honor some of the country artists she admires and respects. She often covers classic or traditional country tunes.

Just a few of the many country songs Clarkson has performed include George Strait‘s “You Look So Good in Love,” Patsy Cline‘s “Walkin’ After Midnight,” and Travis Tritt‘s “Here’s a Quarter.”

More recently, Clarkson covered Vince Gill‘s 1994 single “Whenever You Come Around.” The song was co-written by Gill, and reached the second spot on the Hot Country Songs chart.

Viewers who tuned in to The Kelly Clarkson Show enjoyed Clarkson’s rendition of “Whenever You Come Around.” The comments under the YouTube video of her cover are full of praise:

“You gave me the chills singing this beautiful song. Absolutely beautiful just beautiful,” one person wrote.

Someone else commented, “I wish kelly would make a country album but she could sing the phone book and sound perfect.”

“She is the queen of kareoke let’s give her that title..,” another fan said.

Clarkson also earned a compliment from Gill himself! He ended up seeing her cover of “Whenever You Come Around,” and knew he had to respond.

He shared the video of her performance on his social media accounts, and wrote, “@kellyclarkson covered Vince’s “Whenever You Come Around” on @KellyClarksonTV earlier this week. Great job!”

.@kellyclarkson covered Vince’s “Whenever You Come Around” on @KellyClarksonTV earlier this week. Great job! https://t.co/Jb0dhDI6Cd

In case you didn’t know, Clarkson and Gill released a song together in 2012. Titled “Don’t Rush,” it was released off of Clarkson’s first Greatest Hits album and included Gill as a featured vocalist.

The song peaked at the 23rd spot on the Hot Country Songs chart and was nominated for a Grammy. Clarkson and Gill sang it at the 2012 CMA Awards, and footage from their performance was used to create a music video.