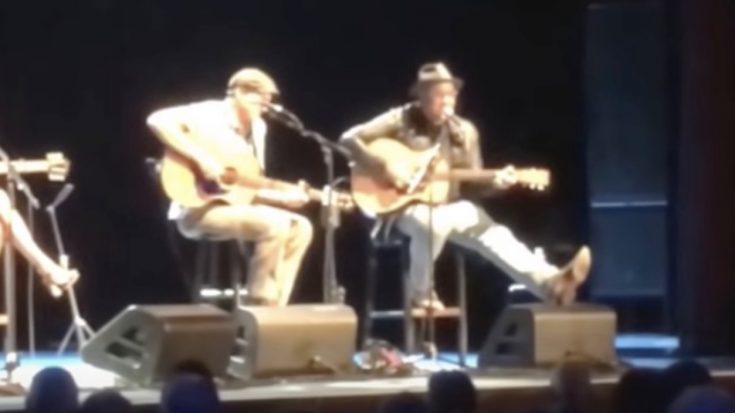 When it comes to the world of country music artists, Vince Gill’s voice is easily one of the most recognizable. His vocals are so unique that finding a duet partner to match his abilities seems essentially impossible.

However, in a Country Music Hall of Fame and Museum affiliated event, Gill was given the incredible opportunity to sing with who we believe was the perfect match for the country legend: James Taylor.

Taylor, a Rock And Roll Hall Of Fame inductee and essentially one of the best-selling artists of all time, has an outstanding resume and even shares some experience in the country music world that Gill knows all too well!

The two legends were accompanied onstage by fellow artists such as Chris Stapleton, Kacey Musgraves, and Joe Walsh, all of whom knew they were in the presence of not only two iconic, trailblazing men, but a one-of-a-kind performance.

Vince Gill, James and Andrea Zonn, backstage after the concert with Eagles at Nationals Park in DC. A night to remember!(Photo: Ellyn Kusmin)

The performance captivated the crowd from beginning to end, evoking the jaw-dropping silence. As the song gradually reached its end, the audience erupted in a monstrous cheer and the two gentlemen humbly shook hands as Gill exclaimed, “[Taylor] wrote that song!”

You can watch this musical dream come true below, and be sure to give us your thoughts!