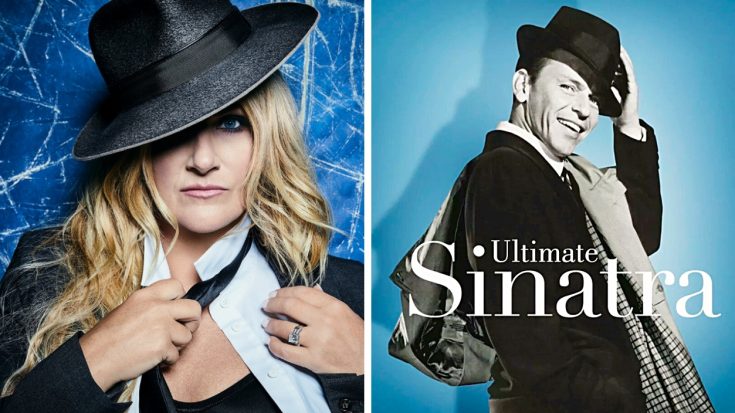 She’d been trying to get this record out for more than two decades, and when the first day of recording finally came – she revealed just how nervous she actually was.

With about 100 songs from Frank Sinatra’s seemingly-endless discography, country music superstar Trisha Yearwood was trying her hand at an album that she’d been dying to cut for a very long time – and she wanted to make sure it was perfect.

Unfortunately, she could only choose 12 songs to go on the record, so one of the hardest parts was actually just making song choices.

So, why did Trisha wait so long to do what she’d been dreaming of for so long? Well, it’s not such a simple answer…

“I don’t know if it’s the freedom of being 54 and just feeling like life’s too short and I’m just gonna do what I’m gonna do,” she told AOL’s Build Series.

Almost 30 years since she made her roaring 1991 debut with “She’s In Love With The Boy” this country music superstar opened up about this lifelong dream project and exactly how it all came together.

I can’t believe it’s been almost 20 years. I celebrate being part of the @Opry family every day and I can’t wait to celebrate with you. It’s one of my greatest honors! https://t.co/W0zNIk1GpU

“I think it’s been a long time coming. I’ve been talking about doing this record for about twenty years. I’ve always loved these songs. My mom loved old movies and she was born in 1937, so this was really her era. I think I got that love of those songs from her.”

Yearwood, who released her very first album full of Frank Sinatra covers (and one original song) in 2019 explained that she’s been singing some old Sinatra standards at her live shows for years – but things just kept getting in the way of her doing this album.

“It kind of came together when I did a birthday party,” she admitted.

That birthday party was a one-of-a-kind celebration hosted by The Grammy’s in honor of what would have been Sinatra’s 100th birthday, and she got to sing one of her favorite songs from his career: “I’ll Be Seeing You.”

After that, she linked up with Don Was who happened to be the musical director for the show and they decided to cut the album together. Hammering out the scheduling was probably the biggest hurdle beyond her bittersweet battle of only being able to choose 12 songs.

Once they both got to Capitol Records in Los Angeles, they gathered a full orchestra and cut this entire album in just four days – talk about a feat. After 20 years, it’s clear she was ready to finally put this on vinyl!

The album, called Let’s Be Frank, is one of Yearwood’s biggest departures from her well-known reign in country music. Between working on country music, her massive tour with husband Garth Brooks, and her cooking show – she was just tickled to be at a point in her career that she can set things aside and do a record that speaks to her soul.

“Yeah you know, there’s a really cool trade-off for the wrinkles. You get really comfortable in your own skin, and there’s a freedom that comes with simply being around this long.”

Watch her interview and full live performance of “Come Fly With Me” and be sure to snag your own copy of this remarkable new record.

Check out Trisha Yearwood’s full playlist of the entire album on YouTube below – just click the right-pointing skip button to get to the next track!