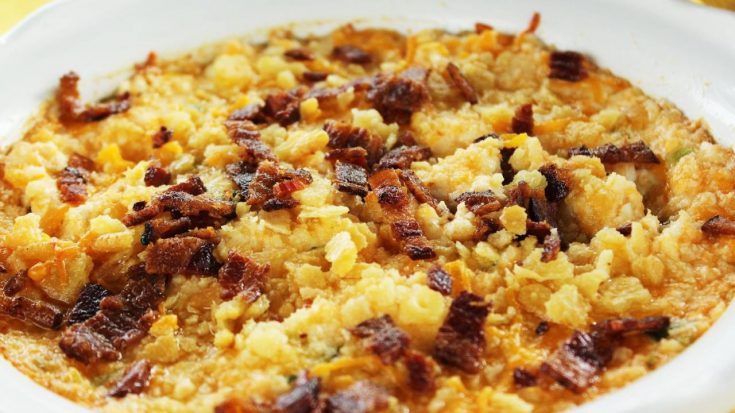 It’s safe to say that throughout her decades-long country career, Trisha Yearwood has stayed in a lot of hotels in many different cities all over the world.

During her stay at a hotel in Charleston, North Carolina years ago, she was given a gift basket that included a cheese dip. She enjoyed the dip so much that she created her own recipe!

If you know anything about Trisha’s recipes from her Food Network show Trisha’s Southern Kitchen, you know that she doesn’t show them off unless they’re easy. Yearwood first shared the recipe on her show in January 2013, and even after all these years, it’s still a hit with her fans!

The dip, which she calls “Charleston Cheese Dip,” is super cheesy, super gooey, super yummy and of course, super easy to make!

First, you pre-heat your oven to 350 degrees. While that is heating up, you mix a half-cup of mayonnaise, a package of softened cream cheese, a cup of grated sharp cheddar cheese, a half-cup of grated monterey jack cheese, two finely chopped green onions, and 1/4 teaspoon of cayenne pepper.

Then, put that mixture in a square baking dish and top with eight crumbled butter crackers. Bake it in the oven for 15 minutes. Once done, top with 8 pieces of crumbled bacon. Easy, peasy!

Check out the full recipe here.

The YouTube video below will show you step by step directions on how to make Trisha Yearwood’s Charleston Cheese Dip!