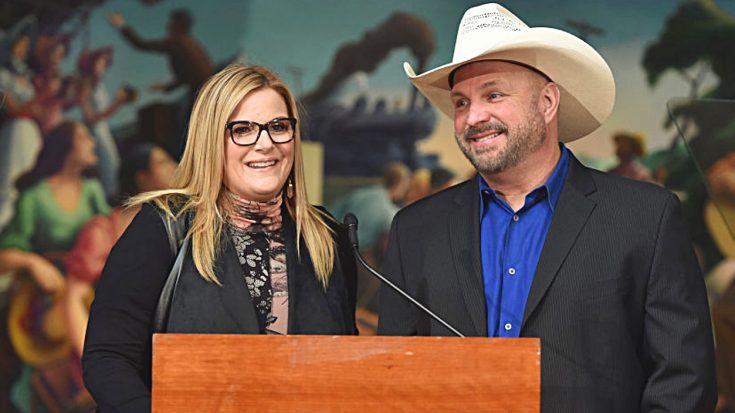 Time To Get Excited…

Trisha Yearwood‘s schedule has to be one of the most jam-packed of anyone in country music. In addition to recording and touring, Yearwood is also the host of her own cooking show, has several lines with different companies, and writes cookbooks.

Now, Yearwood has decided to toss another project on her full plate, and it’s one y’all are sure to get excited about!

Back in 2016, Yearwood’s husband and country music superstar Garth Brooks made waves when he announced his plans to kick off his own SiriusXM channel. The channel launched in September 2016, and is the only outlet where fans can hear Brooks’ music 24/7.

In addition to featuring Brooks’ own music, the channel also showcases work from artists who have influenced the “Friends in Low Places” singer. All content is selected and presented by Brooks, and he also appears on the channel from time to time for special shows and behind-the-scenes content.

As you would expect, Brooks’ channel was a big hit with all who listened, and is still going strong in 2018. It’s set to obtain an even bigger fan base after an announcement Yearwood just made on Monday (April 2).

Via a press release, Yearwood shared the exciting news that she will now be working in connection with Brooks on The Garth Channel. Yearwood has been granted her own show on the channel, which is being called Trisha’s Take Five.

Every week, Yearwood will pick four songs that fit a certain theme that she has in mind. For example, on the show’s debut episode, the theme was “Auto-Pilot,” and Yearwood picked songs with car themes, such as Prince’s “Little Red Corvette.”

After Yearwood plays her four picks, she’s going to call on listeners to choose the fifth song to finish out the set. It’s this aspect of the show that Yearwood is looking forward to the most:

“I’m honored to host my own show on Garth’s SiriusXM channel. I love The Garth Channel because it explores such diverse music. No artist is influenced by just one genre of music. But of all the great voices you’ll hear on The Garth Channel, I’m most excited about including the voice of the listener on Trisha’s Take Five.”

As excited as Yearwood is to have her own show on The Garth Channel, Brooks seems to be even more so:

“I have been lucky enough to be best friends with Trisha Yearwood for over 20 years now. I have found everything I have done gets better when Trisha is added.  Her addition to SiriusXM is no exception. The Garth Channel just got better.”

If you want to catch Trisha’s Take Five, the show airs on Mondays at 5:00 PM ET on The Garth Channel. Rebroadcasts are scheduled throughout the week.

We can’t wait to tune in to Yearwood’s new radio show! Her cooking show has already shown how good she is as a host of a program, as you can see in this clip below.