Toby Keith Revisits The Last Song He Played With Merle Haggard, “Sing Me Back Home” 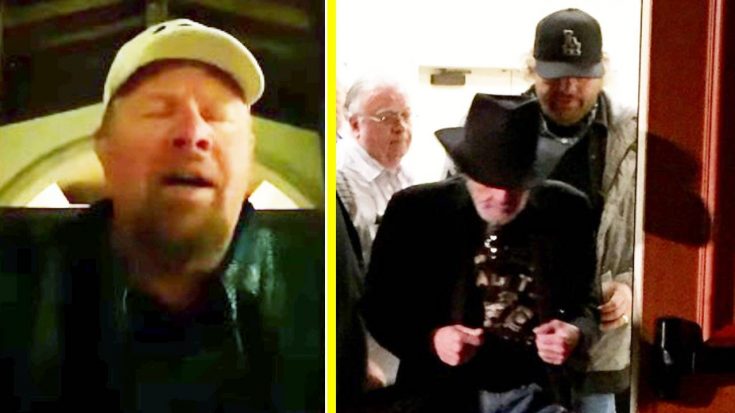 On February 6, 2016, which was just a two months before he passed away on his 79th birthday, the legendary Merle Haggard played a show at the Mandalay Bay Ballroom in Las Vegas.

Despite his publicist making an announcement that he wouldn’t be performing in February 2016 – he had been battling pneumonia since late 2015 – Haggard was determined to perform for his fans on February 6th.

A famous fan happened to be at that show as well, none other than Toby Keith. The “American Soldier” singer not only enjoyed the show, he also played in it, stepping in for his friend when he could no longer perform solo.

In an interview with a local Oklahoma news station after Haggard passed, Keith opened up about helping his friend.

“He looked really frail, and I walked him on the stage and said ‘I’ll be over here. You call me up whenever you need me.’ He made it about eight songs, and he called me up and said, ‘Let’s do something.’”

They ended up performing a few of Haggard’s classics including “Okie From Muskogee,” which you can watch below.

The last song the two performed together that night was “Sing Me Back Home,” Haggard’s song from 1967. Haggard performed his final show on February 13 and passed away the morning of April 6 from complications of pneumonia.

Four years after Haggard’s death, Toby Keith revisited the final song the friends ever performed together, “Sing Me Back Home.”

The past few weeks, Keith has been sharing videos of himself covering songs on a guitar he bought at a furniture store in Mexico. He was on vacation when the coronavirus pandemic began, so he stayed put, but didn’t have an instrument, so he went to a furniture store to pick one up.

Watch Keith’s new rendition of “Sing Me Back Home” below.