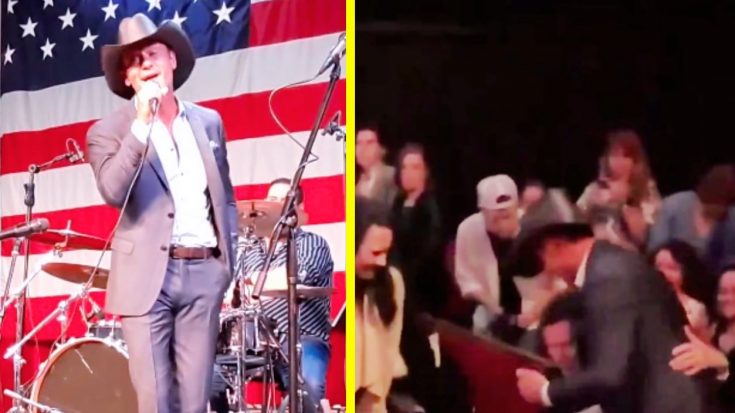 On the 30th anniversary of Keith Whitley‘s tragic passing, country stars gathered to honor his life and legacy. And they did so in the best way they knew how…through music.

Each of the all-star singers who signed on to participate in the concert performed one of Whitley’s unforgettable songs. In Brooks’ case, he had the honor of singing Whitley’s first-ever chart-topping hit, “Don’t Close Your Eyes.”

Someone backstage happened to film Brooks as he sang. Even though you can’t see Brooks’ face in the video, the clip is still something that he, and many country fans, are sure to treasure forever.

Speaking of treasured footage from that night, McGraw happened to come across a video someone in the crowd filmed of his own performance during the concert. Overjoyed that someone happened to capture that meaningful moment, McGraw shared the video with all of his fans on social media.

The video shows McGraw singing the tail end of a lesser-known, but still amazing, song of Whitley’s. That song was “Ten Feet Away,” which Whitley released in 1986 as the third single off of his album L.A. to Miami.

Although it wasn’t a number one hit, the emotional track still performed well on the charts. It claimed the ninth position on the Hot Country Songs chart, making it the first Top 10 hit of Whitley’s career.

A Special Guest Was Watching Tim

The audience member-filmed video of McGraw covering the song shows him tenderly singing the last few lines. You can tell that he poured his heart and soul into his performance based on his body language and the careful softness of his voice.

At the conclusion of his performance, McGraw thanked everyone for their warm response before he quickly rushed off stage and into a crowd. There was someone special watching from the audience, and McGraw wanted to recognize them.

That special someone was none other than country music legend Randy Travis.

McGraw made a beeline to Travis following his performance, and leaned over to give the Country Music Hall of Famer a hug. The video the audience member filmed happens to show this touching moment as well.

So glad someone captured this!  Such a special evening celebrating Keith Whitley. Thanx to Keith’s family and friends for having me out.
And really great to see @therandytravis there. pic.twitter.com/f2ZlqPPjmE

There’s Even More To See

Another audience member also filmed McGraw’s performance, and they filmed the entire thing. The video opens with McGraw talking about Whitley and his music, and how both influenced him as an artist.

After speaking for a while, McGraw moves in to singing, and his performance is sure to leave you breathless. Be sure to check it out in the video below.

We’re sure that Whitley would have been honored to hear his song performed with so much care and love.