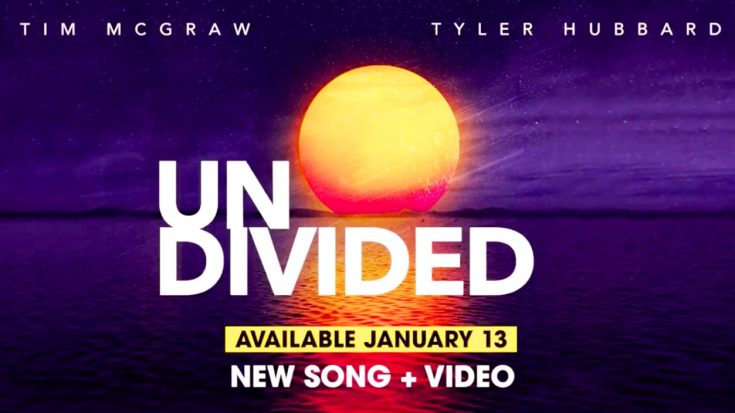 McGraw is currently gearing up to release a deluxe edition of his 2020 album Here On Earth. Due for release in the spring, the deluxe edition will feature at least one new song, titled “Undivided.”

Florida Georgia Line‘s Tyler Hubbard co-wrote the track with Chris Loocke in November 2020. The song serves as a call to unity, with lyrics such as “I think it’s time to come together. You and I can make a change. Maybe we can make a difference. Make the world a better place.”

After he and Loocke finished writing “Undivided,” Hubbard thought of McGraw. He felt like it would be the perfect song for him.

“I knew immediately when I finished it, I had to text it to Tim. He has a way of communicating with the world that is unique in music,” Hubbard said in a press release about the song.

McGraw loved the track, but he didn’t want to sing it alone. He asked Hubbard if he’d like to be included on the recording, and of course he said yes.

“For him to want to perform with me was an amazing feeling. The song is about coming together, and that’s exactly what we did,” Hubbard said.

McGraw shared a preview of “Undivided” on social media on Tuesday (January 5). The short clip contains a bit of the song’s audio and also showcases the single art.

“Tyler sent me this song a few months ago and from the first time I heard it….I knew it was one I wanted to be singing for a long time,” McGraw wrote alongside the preview. “We got together in the studio last month and created something real special.”

“Undivided” will be released in full on November 13, along with a new music video. In the meantime, look below to enjoy the preview clip McGraw shared.

We know from their past collaboration on the song “May We All” that Hubbard and McGraw work well together. So we can’t wait to hear “Undivided” in its entirety!

Tyler sent me this song a few months ago and from the first time I heard it….I knew it was one I wanted to be singing for a long time. We got together in the studio last month and created something real special. Hope y’all agree when you hear it!! #UNDIVIDED coming Jan. 13th. pic.twitter.com/ooR3abi9Hw