Tim McGraw Gets Honest About Faith Hill: “This Is Why I’m Here On Earth” 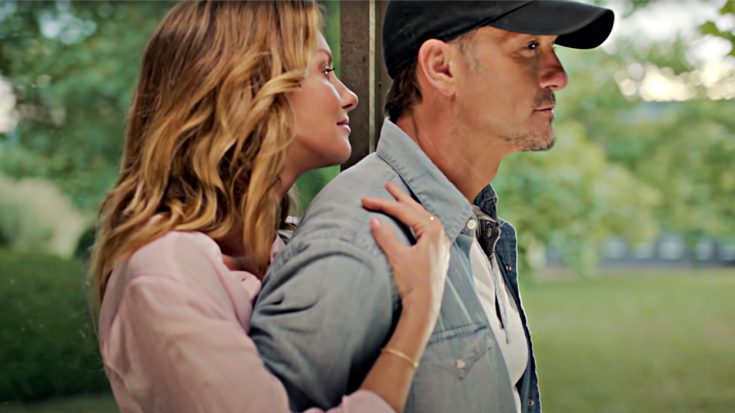 In an interview with Sunday Today, Tim McGraw revealed his true feelings about his wife, Faith Hill.

In the interview, McGraw was asked if he remembered the moment that reflected the lyrics in his latest single “Here On Earth.” The reporter asked, “You sing in the song beautifully about this moment we all have, where you close your eyes and it hits you, ‘This is why I’m here on Earth.’ Do you remember that moment for you?”

“Well, I certainly remember that moment I met my wife. That’s for sure.”

He continued to share the moment he held his children for the first time, as another time that really put things into perspective for him saying:

“But I think for everyone … those things happen where you realize what you’re doing and why you’re doing it and what you’re here for. The fathers out there can appreciate the first time that you hold your child is certainly the moment that you realize that anything else that you do has meant nothing until this moment.”

McGraw went on to share that working with his wife, Faith, and performing at concerts with her keeps him on his toes, and she is continually making him want to strive to become better as a performer. He compares singing with Faith “like a NASCAR trying to keep up with an Indy car.”

He shared that she definitely lets him know when he’s not holding his own on stage, saying:

“I get that look from her sometimes during the middle of the show with her. You know, ‘You’re faltering a bit, son.’ The point is she makes me better.”

The couple first met at the Country Radio Seminar in 1994. They were both a part of the “New Faces” event. While backstage all the artists took a group photo and there was an instant attraction between Tim and Faith.

Where it all started… Follow @Officialcmhof for more on our exhibit coming in November! #CMHOF50

In an interview with The Bobby Bones Show, Faith and Tim spoke about the first time he officially asked her out. Faith explained that Tim came over to her home, unannounced, with a bowl of homemade chicken and dumplings and cornbread that he had made from scratch. Faith continued the story explaining that on top of the aluminum foil-covered bowl, there was both a spoon and a fork. Tim told her, “I didn’t know if you liked to eat your dumplings with a spoon or a fork.”

Tim jokingly replied to her telling the story, “You make up for your inadequacies.”

Happy birthday to this crazy, talented, beautiful woman. I am so lucky to be married to and be with her for the rest of my life. The best mother and role model that my 3 daughters could possibly have. She is extraordinary!!

The duo was married in October 1996 and went on to be one of country music’s power couples.

@FaithHill – “Happy anniversary baby Got you on my mind”

Their relationship is definitely one to admire and look up to. It’s inspiring to see the love and admiration they have for each other.

Watch the interview with McGraw below.