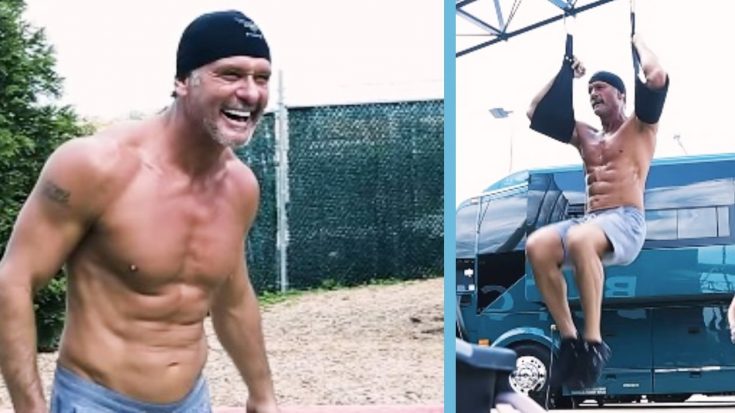 Tim McGraw is passionate about fitness. He’s so devoted to his exercise regime, he takes a mobile gym with him on tour so he can stay in tip-top shape even while he’s on the road.

During a recent interview with USA Today, McGraw said he even maintained his workout schedule while he was filming 1883. But he had to wake up super early to make time for his exercise!

“I only missed two workouts,” McGraw said of that time. “I’d get up at around 2:30 a.m. to get in a workout, but it was tiring. That worked for the character. The more tired we got on the trail, the more tired we looked because we actually were tired.“

Still, McGraw said he ended up gaining ten pounds while he was filming 1883. He attributes that to the fact that they “had these great sides of beef roasting all the time” and he put on weight from eating “a bunch of beef.”

McGraw said he managed to drop that extra weight once filming ended. He was able to get back to his home gym, ate healthier, and got better rest.

Now, McGraw is traveling across the country on tour. As always, he brought his mobile gym along with him, and has encouraged his tourmates Russell Dickerson and Brandon Davis to join in his workouts.

McGraw shared a video on social media showing the grueling workouts he’s gotten his tourmates to participate in. The clip shows them swinging sledgehammers and pushing large tires around.

Dickerson and Davis were good sports about the whole thing, and pushed through every challenge McGraw threw at them. It’s clear they were doing some hard work, but McGraw made everything look easy.

“That sledge hammer bout did me in,” Davis commented on the video McGraw shared.

McGraw also received comments from some of his 1883 co-stars. Eric Nelsen, who played Ennis, commented, “Always in beast mode.” LaMonica Garrett, who played Thomas, said, “Gettin after it!!”

McGraw also showcases his super fit physique in the video. His difficult workouts definitely pay off!

Watch McGraw put his tourmates through his grueling workout routine by tuning in to the video below.