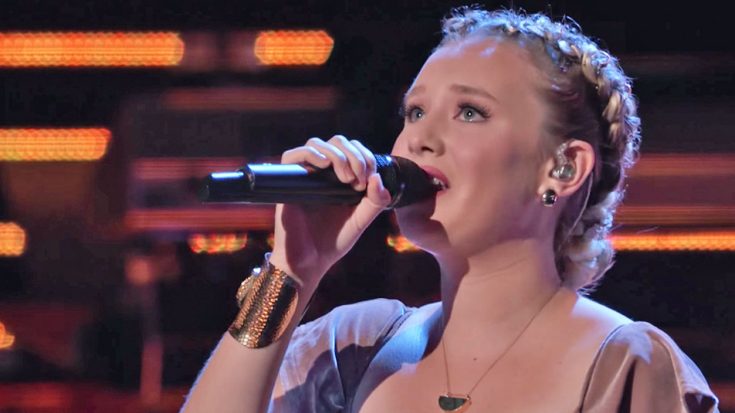 Addison Agen, the 16-year-old from Fort Wayne, Indiana, had an unconventional run on Season 13 of  The Voice. She auditioned with a soulful rendition of Ray LaMontagne’s “Jolene” that caught the attention of two coaches: Miley Cyrus and Adam Levine.

After lots of persuading, she chose Cyrus as her coach and delivered flawless performance after flawless performance. She competed in the Battle Rounds after her duet with teammate Karli Webster but wasn’t chosen as the winner. Levine had been keeping an eye on her and right when she was let go from Team Miley, he pressed his button to steal her.

While on Team Adam, she went to the Knockout Rounds, where she performed “Beneath Your Beautiful” by pop singer Labrinth and beat out teammate Dennis Drummond to advance to the Playoffs. Usually, the Playoffs are during the first live shows, but this year, for the first time since season 6, they were pre-recorded.

For her Playoff round performance, she took on the tall task of singing the iconic John Prine song “Angel from Montgomery.” He first released it off his self-titled 1971 album that has been covered by the likes of Tanya Tucker and John Denver, but it got wide recognition when Bonnie Raitt released her version of it in 1974.

Agen put her own unique spin on the classic with her angelic vibrato and masterful storytelling ability.

“Yes!” Blake Shelton said at the end of her performance.

“She sounds so good,” added Cyrus.

She earned a standing ovation from her coach, as well as the entire audience for her incredible performance. Levine loved her performance so much, he advanced her to the live shows. She ended up placing second in the competition that season, losing to Team Blake’s Chloe Kohanski,

Watch her “Angel from Montgomery” performance below.