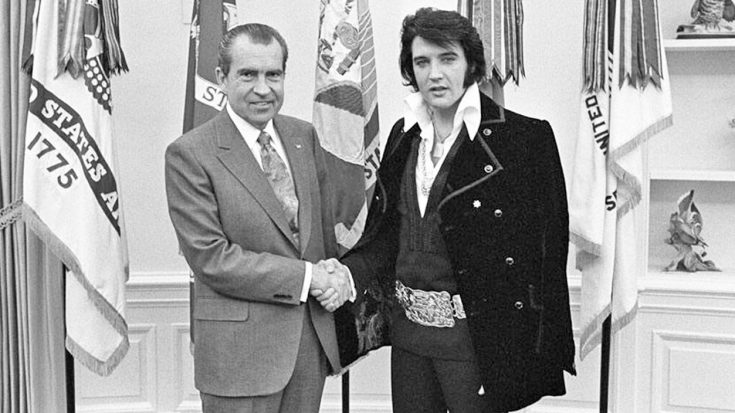 It was the photo that shook the nation. The King of Rock and Roll shaking hands with America’s president… but for what? Speculation surrounded any reason why these two would need to meet but Elvis had one plan only.

On December 21, 1970, a strange moment in history occurred. At 12:30 p.m. while standing in the Oval Office, two 20th century icons stood side by side for what would become the most-requested photo in US National Archive history. Both Elvis Presley and Richard Nixon were making powerful impacts in their niches, gaining strong fanbases behind them. Presley had just made his career comeback meanwhile Nixon was becoming the promising president the country hoped for.

#OTD 45 years ago, Elvis Presley met President Nixon in the Oval Office.Visit the "When Nixon Met Elvis" online exhibit at the US National Archives here: http://1.usa.gov/1UXvv96

The Story Behind The Photo

But behind the famous photo, is a unique story from this unlikely pair. It all begins with Presley’s determination to get his own badge from the Federal Bureau of Narcotics and Dangerous Drugs. Presley, who owned quite a few guns himself felt the badge “represented some kind of ultimate power to him,” according to his then-wife, Priscilla.

Presley hopped on a red-eye to Washington with full faith in meeting Nixon. On an American Airlines notepad, he wrote a letter to the president pleading for his time and concern for America.

A handwritten note to Nixon from Elvis

Presley was focused on the war on drugs, fearing “drug abuse and Communist brainwashing techniques” were happening in America. The legend felt that his influence in the world of entertainment could reach far more people and aid the issue. He continued by telling the president where he was staying and how Nixon could reach him if allotted the opportunity.

Presley confidently dropped the letter at the entrance gate of the White House and waited for Nixon’s call. Then, it came. Presley showed up to the White House for their big meet-up. Dressed in a purple velvet suit, gold belt, and large sunglasses, The King was ready to meet Mr. President.

Their meeting mostly revolved around the discussion of Presley’s yearn for the badge. After some persuasion, it seemed Nixon felt Presley could actually help with the change. Nixon ordered his aide, Egil “Bud” Krogh, to get Presley a badge in which he reacted in an ecstatic and thankful manner.

“I would love to meet you just to say hello if you're not too busy.”- Elvis Presley in a letter to President…

Directly following the meeting was when this iconic photo was taken. Standing side by side and shaking hands, two American icons made plans to change the country forever.

This is our most-requested photo. Here's the story of how it happened: http://t.co/Co22Z8gTHq #Elvis80 #Elvis pic.twitter.com/jtAhLo12cw