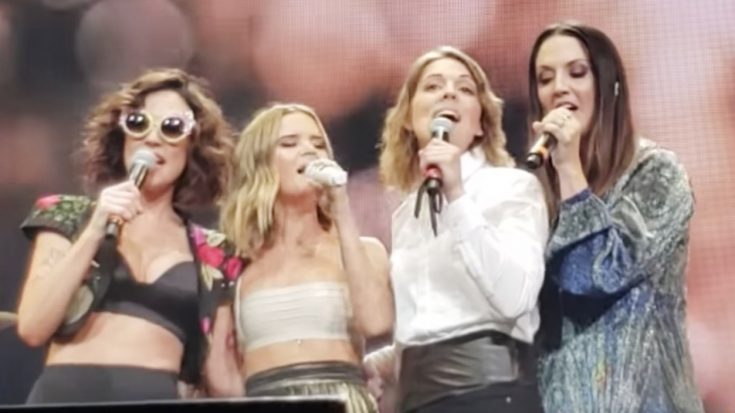 In honor of her 87th birthday, Loretta Lynn had her very first birthday party.

Of course, a party honoring Lynn wouldn’t be complete without all of her superstar friends! Alan Jackson, Brandy Clark, Darius Rucker, Garth Brooks, Trisha Yearwood, Kacey Musgraves, Keith Urban, Little Big Town, Martina McBride, George Strait, Miranda Lambert, and the Pistol Annies were just some of the few people who took the stage to sing for and in honor of Lynn.

We are just hours away from the birthday celebration! Make sure you post your photos with #HappyBirthdayLoretta and #LovinLoretta if you are at the show! We will try to repost some! – Team LL

The performers not only sang her biggest hits, but some sang hits of their own. Strait performed ‘Amarillo By Morning” for her, while Jackson sang “Where Were You When The World Stopped Turning?”

One group who sang one of her hits was The HighWomen, which is a newly-formed supergroup of female singers Maren Morris, Brandi Carlile, Amanda Shires and Natalie Hemby. Loretta Lynn’s All-Star Birthday Celebration served at The HighWomen’s very first performance together. They performed “It Wasn’t God Who Made Honky -Tonk Angels.”

The legendary Kitty Wells first released “It Wasn’t God Who Made Honky-Tonk Angels” in 1952 as an answer song to the Hank Thompson hit “The Wild Side of Life.” In Thompson’s song, he sang, “I didn’t know God made honky tonk angels,” which was just begging for a female’s perspective.

“It Wasn’t God” blamed unfaithful men for creating unfaithful women and became the very first number one Billboard country hit for a solo female artist, which helped Wells pave the way for artists like Dolly Parton, Loretta Lynn, Patsy Cline, and Tammy Wynette, as well as songs that call out men for their infidelity.

The song has since been covered by many country singers including Lynn Anderson, Waylon Jennings and Jessi Colter, and most notably by Parton, Lynn, and Wynette, which Wells made a guest appearance on.

As Lynn sat side stage, the four women honored their shared hero. They each got a time to shine solo, but their performance was taken to a new level when they all joined together in harmony for the chorus. It really reminded us of Lynn’s collaboration with Parton, Wynette, and Wells.

Watch their awesome performance below.