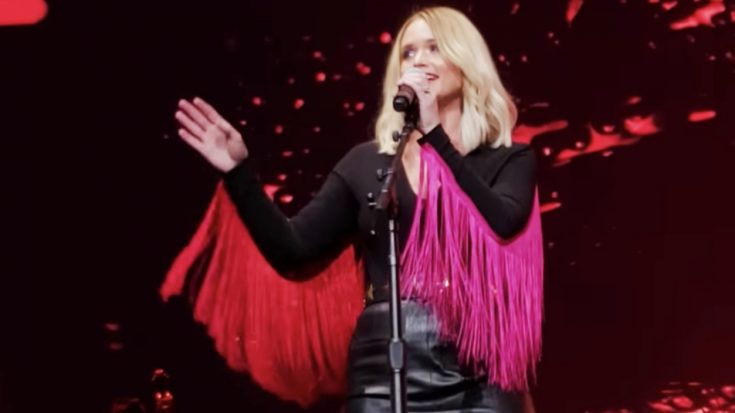 We are just hours away from the birthday celebration! Make sure you post your photos with #HappyBirthdayLoretta and #LovinLoretta if you are at the show! We will try to repost some! – Team LL

Lynn has some attitude-filled songs and Lambert fully embraced that the entire night, especially when she performed solo.

While introducing her song, Lambert said, “I’m so honored to sing for the queen. Thank you for inspiring me, for all of the advice, I guess you would, about when husbands piss you off a little bit.”

This spicy comment, which she couldn’t help but laugh at, got her lots of cheers from the women in the audience who sound like they know a thing or two about being pissed off at their husbands!

She continued, “I’m gonna do one of those right now. It’s called ‘Don’t Come Home A Drinkin’ With Lovin’ On Your Mind.'”

Lambert surprised the world back in February when she announced that she got hitched to “the love of [her] life,” a New York Police Officer named Brendan McLoughlin. Turns out they got married in late January and just waited a few weeks to tell everyone!

In honor of Valentine’s Day I wanted to share some news. I met the love of my life. And we got hitched! My heart is full. Thank you Brendan Mcloughlin for loving me for…. me. ❤️ #theone

Lambert performed the sassy country song, which was Lynn’s very first number one hit, for the sold-out crowd. The legend wrote the song with her sister Peggy Sue about her husband Oliver “Doolitte” Lynn. The singer is fed up of her husband coming home drunk and expecting some “lovin'” from her.