The Burt Reynolds Tribute You May Have Missed At The CMAs 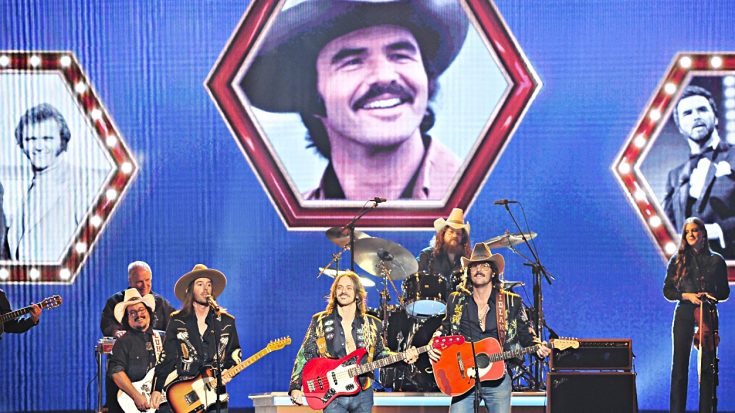 During the CMA Awards, there was one very special performance that not everyone got right away. But if you did, you must really know your stuff!

This year, the band Midland was nominated for three awards: Single of the Year, New Artists of the Year, and Vocal Group of the Year. They also put on a very special performance during the event that not everyone got right away…

Midlanderos, check your Gator Boys out tonite on the @cma’s. We’re nominated for 3 awards and have a special performance in store for y’all. Don’t adjust your TV, it’s not signal issue ?

A Legend Gone Too Soon

Burt Reynolds is best known for his amazing acting skills. The Smokey and the Bandit star was our “Bandit” for a good chunk of our lives so when we lost him on September 6, 2018 – the world was devastated.

Oh how sad I am today along with Burt‘s millions of fans around the world as we mourn one of our favorite leading men. I know we will always remember his funny laugh, that mischievous sparkle in his eyes, and his quirky sense of humor. You will always be my favorite sheriff, rest in peace my little buddy and I will always love you, Dolly

A Tribute to Burt

So when Midland wanted to honor the great, Burt Reynolds they decided to give a rockin’ performance of the Smokey and the Bandit theme song – Jerry Reed’s “East Bound And Down.”

They even posted to social media after the show that they “Hope y’all enjoyed our performance of eastbound and down tonight on the [CMAs]. It’s available now on all streaming platforms. Have a great night y’all! Rest in glory to The Bandit himself and Jerry Reed.”

Accompanying their post was an image of them playing and then a later post of a cartoon Burt Reynolds.

Hope y’all enjoyed our performance of eastbound and down tonight on the @cma’s. It’s available now on all streaming platforms. Have a great night y’all! Rest in glory to The Bandit himself and Jerry Reed.

And boy, did they deliver. Up on stage, the boys played a twangy and upbeat version of Jerry Reed’s “East Bound and Down.” Without any introduction – only a few of the biggest fans knew right away what the boys were up to.

Luckily there were a few cameos of the movie on screen for the rest. You can watch their full performance below and let us know what you think in the comments!

We are digging the retro sound of @MidlandOfficial! #CMAawards pic.twitter.com/XH1C5Ch2VE