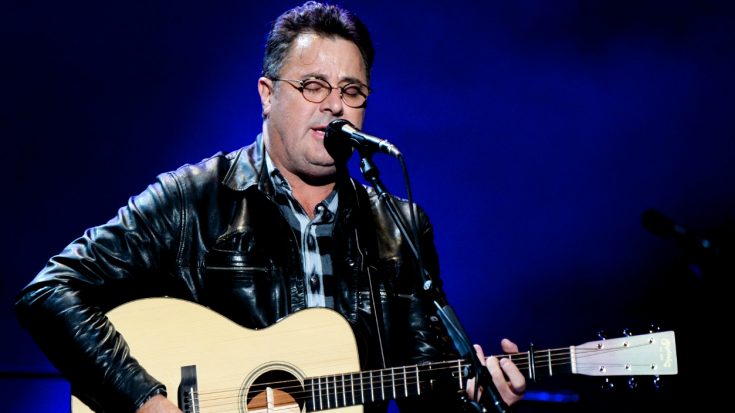 Just hours after he missed the CMA Awards and his scheduled performance with Ricky Skaggs, the news broke about his hospitalization – and now his family has followed up with a statement and explained what’s going on with the classic country star.

Last night on the red carpet of the 52nd Annual CMA Awards, country stars Brothers Osborne opened up candidly to Kellie Pickler and Ben Aaron about how the performance schedule had shifted – and they revealed that Vince Gill was in the hospital and unable to perform.

“I don’t know if the Ricky Skaggs thing has been announced or not,” T.J. explained pointing to his brother. “But John is going to be sitting in with Ricky Skaggs and Keith Urban…”

“Vince Gill, unfortunately, was in the hospital – he has a kidney stone,” John added. “So, Vince Gill’s kidney stone was the best thing that ever happened to me!”

Now, Gill’s talented daughter Jenny Gill has opened up on Instagram about her dad’s condition and revealed that he’s still in the hospital as of this morning.

“Well, I saw a red carpet clip of Brothers Osborne talking about my dad’s medical condition,” she said, adding “So I feel like I can talk about it now…”

I can’t tell if I’m enjoying myself or about to lose it. #familyfarm #relaxation #icanttakeanormalpicture

We love it when Grandad is home! I think he likes it to. #EverlyJune

As she continued, she reiterated that her dad had a kidney stone and was still in the hospital awaiting surgery. Due to the nature of the medical situation, he was forced to cancel multiple shows – including the CMA Awards performance.

His shows for November 15th (Birmingham), 16th (St. Louis), 17th (Indianapolis), and 18th (Danville, KY) have all been removed from his tour schedule. The next dates for shows pick back up on November 28th when he and wife Amy Grant will perform a series of Christmas concerts.

“Dad has a kidney stone, had to cancel some shows, obviously couldn’t play the big show last night,” Jenny continued. “He’s getting it taken care of today, so he should be better soon.”

Watch her statement below and join us in wishing Vince Gill a speedy recovery!