Teen With Mullet Gets 4-Chair Turn With Rockin’ “Tulsa Time” 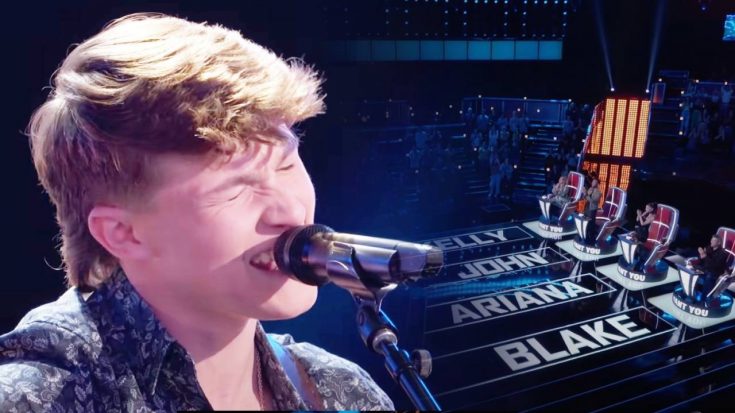 Season 21 of The Voice is in full swing and on Friday (Sep 24), the show released another early audition, one that had all four coaches turn for him. 17-year-old Carson Peters, while rocking a sweet mullet haircut, performed Don Williams’ 1978 hit song ‘Tulsa Time.”

Peters put a bit of a rock twist to the country classic, and gave it some personal flair with a few vocal runs. John Legend was the first to turn his char, followed quickly by Shelton who started singing along and playing air guitar. Ariana Grande was next When Shelton turned, Peters flashed a huge smile, perhaps giving away who his first choice as coach was.

Legend asked him, “Do you perform a lot?” to which Peters replied, “I started out playing the fiddle.”

“My chances are getting better and better!” Legend joked.

Clarkson asked him who his influences are. Peters said, “One of my really biggest influences, and I’ve been lucky enough to play with him, is Mr. Ricky Skaggs.”

When he said that, everything clicked! We have been watching this young man perform since he was just a little kid! Peters has performed at the Grand Ole Opry with Ricky Skaggs, on The Tonight Show, for Betty White, and so many more places!

He currently is part of the bluegrass band Carson Peters and Iron Mountain.

Clarkson encouraged him to play the fiddle on her team, while Legend said he is “fiddle friendly” on his. Shelton made an impassioned speech saying, “Let’s not mess around with what this opportunity is for you. Let’s do this right.”

On the September 27th episode, Carson took some time to think about which coach to choose, and because of his “knowledge” of country music, the teen chose Blake Shelton, but not before Legend jokingly stood up thinking he had a chance of winning.

We think he will go far in the competition on Team Blake! Watch Carson’s full audition below.