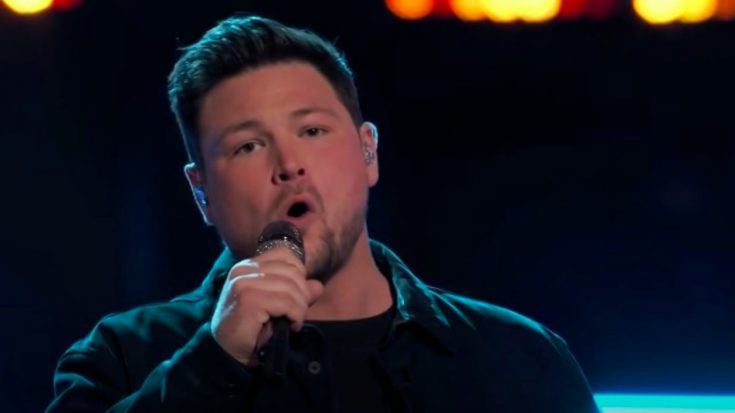 As The Voice prepared to move into its Season 19 finale, it had to cut its pool of artists from nine to five.

The artists who earned the most votes from each team were automatically saved. Those artists were Jim Ranger of Team Blake, Carter Rubin of Team Gwen, DeSz of Team Kelly, and John Holiday of Team Legend.

All of the remaining artists (Team Blake’s Ian Flanigan, Team Gwen’s Ben Allen, and Team Legend’s Tamara Jade and Cami Clune) were left to compete for the Instant Save. Each one delivered a performance and then fans voted in real time for the winner.

The person who won the Instant Save got to move on to the finale…and that person was Ian Flanigan.

From the get-go, the coaches and fans have been enchanted by Flanigan’s unique voice. His coach Blake Shelton has said time and time again how there is no one else in the world that sounds like him.

Flanigan chose to showcase his standout voice during the Instant Save by singing Travis Tritt‘s powerful hit, “Anymore.”

Because “Anymore” is such an emotional song, it isn’t easy for people to pull off. But it was obvious Voice viewers thought Flanigan did a superb job bringing its heartbreaking story to life.

“you definitely have a diamond in the rough with @IanFlanigan” one Twitter user remarked after hearing Flanigan’s Instant Save performance. See that fan’s reaction and a few others below.

.@blakeshelton #VoiceTop9 you definitely have a diamond in the rough with @IanFlanigan!!! By far my favorite contestant on the show!! He definitely needs to go ALL. THE. WAY!!! His future is bright!

@IanFlanigan …I'm so glad America saved you! I love your voice! I think you should do more of Travis Tritt's song. Good luck next week, I'll be voting for you!!

You are my pick to win. Congratulations and good luck @IanFlanigan

I can’t wait until your first album! From a fellow upstater! I could listen to you all day! Love love love your voice!

Now tune in to the video below to check out Flanigan’s performance of “Anymore.” Once you watch the video, you’ll be able to understand why he won The Voice‘s final Instant Save of the season.

Whether Flanigan wins the show or not, he has a bright future ahead of him!