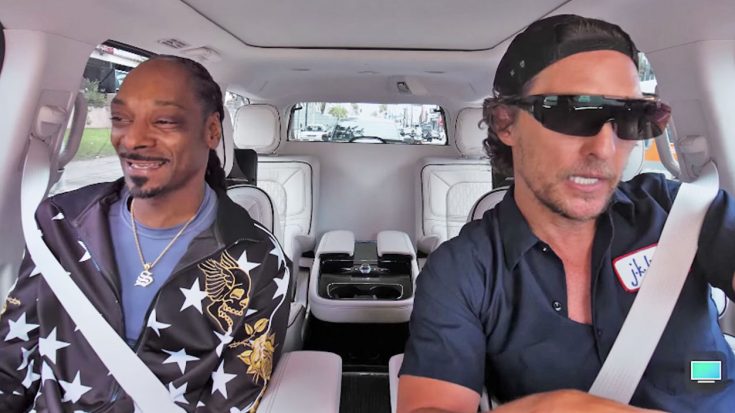 Carpool Karaoke has become a worldwide sensation ever since TV personality James Corden hopped behind the wheel and started inviting Hollywood’s most beloved stars.

The best part? All genres and occupations are welcome. From country singers to award-winning actors, there’s a seat for everyone. For a 2019 ride, two unusual suspects rolled around town together – even singing a classic country hit.

On The Road Again… Literally

Iconic rapper and producer, Snoop Dogg hopped in the passenger seat alongside Oscar- winning actor, Matthew McConaughey, for one hell of a ride. McConaughey – rockin’ large sunglasses and a backwards hat – lead the vocals with his deep and raspy voice. Singing none other than legendary Willie Nelson‘s “On The Road Again” this unlikely pair turns on all the charm.

The always smiling Snoop Dogg joins in during the chorus as the duo sings the entire song together in unison. Snoop even adds some ad-libbing into the mix to spice up the iconic song.

This wouldn’t be the first time Snoop and Willie were caught singing on a song together. In 2009, Snoop surprised fans showcasing his country side with his song, “My Medicine” ft. Willie. Even dedicating the song to Johnny Cash!

Adding to the fun – the pair went to Amsterdam together! While on The Tonight Show Starring Jimmy Fallon, Snoop told the hysterical story of the time he and Willie went to KFC together which just happens to be both of their favorite joints. Their time together sounded like quite the trip.

Understandably, it was only fitting for Snoop & McConaughey to tribute their dear friend during their karaoke session of course. After singing “On The Road Again,” this dynamic duo will have you rolling with laughter over the rest of their ride.

Don’t worry, you can watch the full episode here.

Check out their duet of Willie Nelson’s “On The Road Again” below.