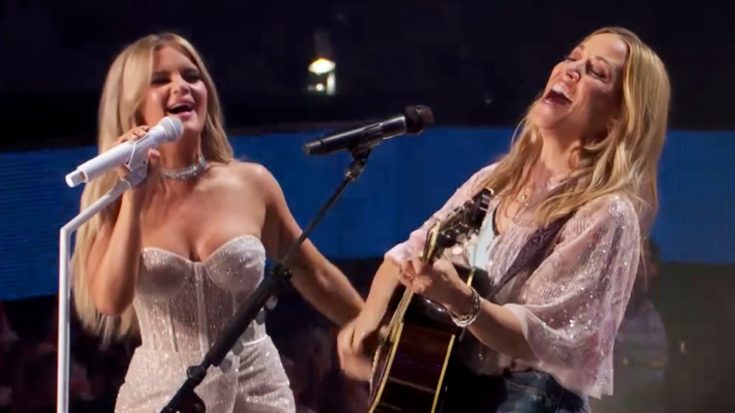 Over the years, the CMT Music Awards have become known for its all-star collaborations. While oftentimes those collaborations are between two (or more) country artists, the occasional cross-genre collaboration also makes an appearance.

When it comes to crossing genres, Sheryl Crow is a pro. There’s no one label you can use to define her, as her music blends elements of rock, pop, folk, soul, blues, and of course, country.

Since “Picture” was released, Crow has seemed to embrace country music more than any other genre. She is a frequent fixture at tribute shows in honor of country legends, and recently released an updated version of her song “Redemption Day” featuring recorded vocals from the late Johnny Cash.

Crow’s newest release also earned a vocal contribution from a popular country music star as well as a rock and roll icon. Titled “Prove You Wrong,” the track features Crow on lead vocals with support from singer Maren Morris and the legendary Stevie Nicks.

Speaking to CMT after the song’s release, Crow said it was something that took her three years to put together:

“I felt like, ‘You know what would be really cool is to be able to pay it forward to someone who I feel like is an extension of Stevie and I’…Maren is a really tough, but super sweet, great songwriter, great musician, and I think she’s going to be around for a long time. I’ve loved getting to know her and getting to work with her.”

It’s fitting that the song features three powerful female voices, since it’s definitely a girl power anthem. And Crow and Morris joined forces to bring a little bit of that girl power to the CMT Music Awards on Wednesday night (June 5).

Nicks was unable to attend since she’s traveling on tour, but Crow wasn’t worried about her absence. “Maren holds her own!” Crow told CMT after they rehearsed for their performance. And hold her own she did!

While the two singers did take turns on lead, they sang together most of the time. Combined, their voices created a strong sound that rang throughout the arena. And by the end of their performance, we’re sure plenty of the people in the crowd were singing along with them!

Talk about an empowering moment! You can go ahead and relive Crow and Morris’ outstanding performance of “Prove You Wrong” in the clip below. We can’t wait to watch them sing this live with Nicks one day!