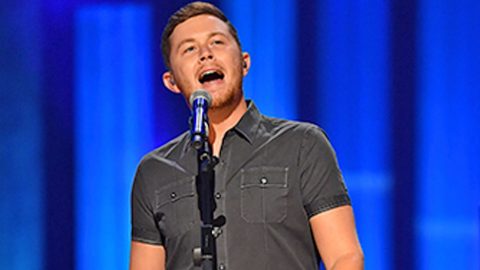 Thanks to American Idol, we fell in love with the sweet sound of Scotty McCreery‘s low, classic country voice. Because of his incredible performances and staying true to his country roots throughout the competition, McCreery won the tenth season of American Idol.

He continued to stay true to his roots with his music post-Idol and always pays tribute to his heroes including Randy Travis, George Jones, and Conway Twitty. While it’s never a surprise when he covers a classic country song, it is always a treat.

When McCreery was playing an acoustic show in 2015, he knew he wanted to end it with Jones’ hit song “The Grand Tour.” After just singing the first three words of the song, the crowd went wild!

“The Grand Tour” was released in 1974 from George’s album of the same name. The song was a total hit, and became George’s sixth #1 song on the Billboard Hot Country Singles chart.

We’re pretty sure that even Jones would be impressed by McCreery’s rendition, so check it out for yourself and prepare to be amazed!