Glen Campbell Plays ‘Gentle On My Mind’ One Last Time 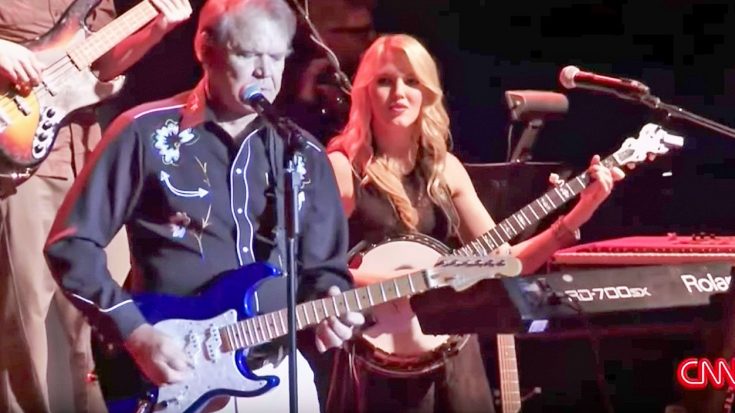 After a six-year-long battle with Alzheimer’s disease, Glen Campbell passed away at age 81 on August 8, 2017. Following his 2011 diagnosis of the devastating disease, the great country singer organized his Goodbye Tour to properly bid his fans farewell before the disease rendered him unable to perform.

At the end of the tour, Glen made his historical final live performance at Uptown Theatre in Napa, California on November 30, 2012. And what better song to make his last than his iconic “Gentle on My Mind”?

R.I.P. Glen Campbell. Photo taken on October 17th, 2012 when Glen performed at The Wilbur for his Goodbye Tour. pic.twitter.com/b20vEF21Xx

Stumbling at the beginning of the performance, Glen powered through in an inspirational show of mental strength and pure talent. The legendary singer brought his talented daughter Ashley Campbell along on tour with him, the beautiful blonde gazing lovingly at her father throughout his performance.

“That was a really difficult day,” Glen’s wife Kim said according to Taste of Country. “It was difficult leading up to the show, it was really stressful and difficult. That night was really, really, really hard, and we just knew this was it. We were going home for the Christmas break, and that we were not gonna add more shows after that.”

The great country singer died of complications from Alzheimer’s disease while living in a full-time care facility in Nashville, Tennessee.

You can watch his final performance of “Gentle On My Mind” below.