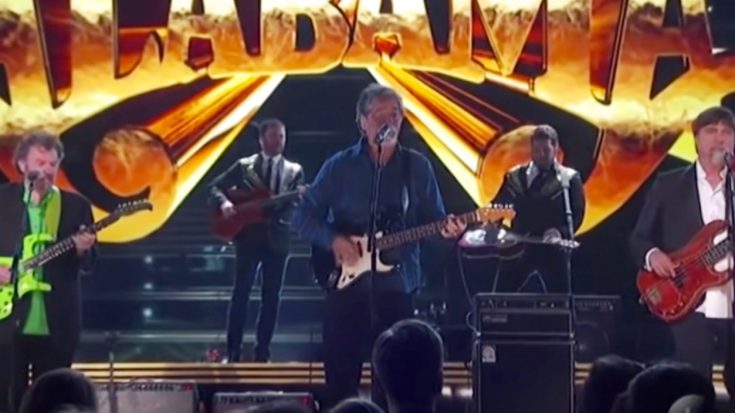 The CMA Awards celebrated their 50th anniversary in 2016. The anniversary led to the release of the mashup song “Forever Country,” which includes samples from “On the Road Again,” “Take Me Home, Country Roads,” and “I Will Always Love You.” 30 artists were featured on the track, including Alabama.

It only seemed right to have Alabama involved in the creation of “Forever Country.” Over the years the group has earned a total of seven CMA Awards and 40 nominations. They’ve received the coveted Entertainer of the Year award three times.

Alabama also appeared in the official music video the CMA released for “Forever Country.” They show up midway through the video, right after Brooks & Dunn, and sing lines from “Take Me Home, Country Roads.”

As we look back on this performance in 2022, one of the three members of Alabama is no longer with us. Jeff Cook passed away on November 7, 2022 at the age of 73. His bandmates shared the news the following day (November 8), which was the day before the 56th CMA Awards.

The CMA released the following statement about Cook’s passing:

“We are deeply saddened by the passing of Jeff Cook, co-founding member of legendary band Alabama and Country Music Hall of Fame member. Our thoughts and prayers go out to his family and loved ones during this time.”

Watch the video below to see Cook perform with Alabama at the 50th CMA Awards in 2016. We’re so glad he and the other members of Alabama were able to participate in such a monumental performance. They appear around the 4:35 mark in the video.

Cook will be missed…