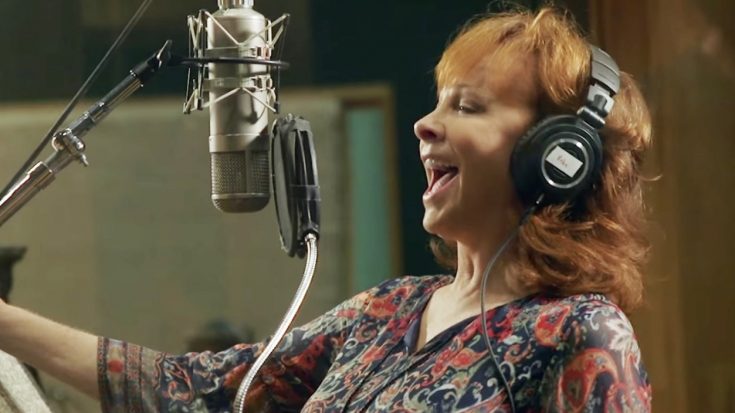 When Reba McEntire promised us months ago that her new album would be “the most country record I’ve done in a long time,” she wasn’t lyin’!

She announced her 29th studio album, titled Stronger Than The Truth, in February and revealed the track listing to her 1.4 million Instagram followers.

Although the album won’t be released until April 5 – just two days before she is set to host the ACM Awards for the 16th time – she has been slowly releasing songs for her fans to enjoy. The first was the title track, followed by the ever-so-sassy “No U In Oklahoma,” and the heart-wrenching songs “In His Mind” and “Tammy Wynette Kind of Pain.”

With each song, she has been releasing studio footage of her and her team recording each song, and her latest is no different. Titled “Storm In A Shot Glass,” this song is the most upbeat of all the songs she’s released so far.

“We just got this song not too long ago,” she said in the video. “It’s the first one we’re doing on our second day here in the tracking room in Nashville, Tennessee…we’re ready to rock!”

STRONGER THAN THE TRUTH | "Storm In A Shot Glass"

Here comes the lightning flashes, here comes the thunder crashes…go in the studio with Reba as she records "Storm In A Shot Glass" from the new album STRONGER THAN THE TRUTH. Listen here now: https://reba.lnk.to/STTT

We can already envision the line dance routines that will be created just for this song! We can’t wait until April 5 when the entire album is released – we love what we’re hearing. To pre-order the album, make sure you click here.

Take a listen to the full song below.