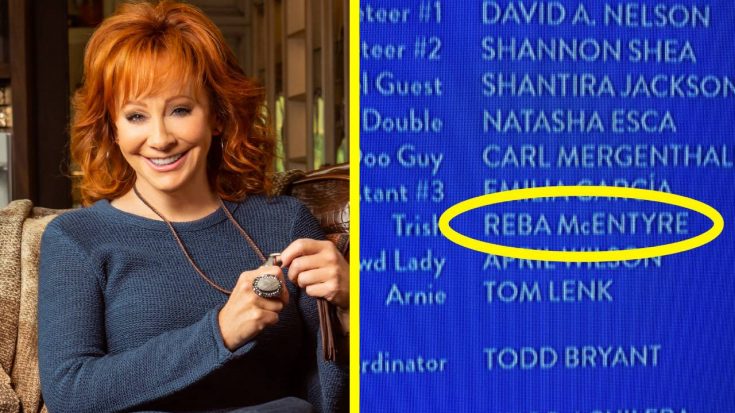 One of the most-talked about new movies that premiered over the weekend was Barb & Star Go To Vista Del Mar, starring SNL alum Kristen Wiig, Annie Mumolo, and Jamie Dornan.

The trailer left fans everywhere with lots of questions, with the main one being: What is this movie even about?!

Well, when it premiered on Friday (February 12), fans found out that the movie followed longtime best friends Barb and Star as they traveled to the fictional city of Vista Del Mar, Florida, marking the very first time they ever left their midwestern town. Adventure ensues and so does love and a villain’s plot to kill everyone. Normal!

While most of the cast had previously been announced, there was one part that was kept secret until the movie premiered: the mythical sea spirit, Trish.

According to the movie’s creators, there was only one person that could bring this role to life: Reba McEntire. So much so that they wrote her a letter begging her to be in the film.

“If you’re about to die underwater, and some sea spirit is about to save you, it would be Reba McEntire,” director Josh Greenbaum said. “There’s some casting that just clicks. Reba is not only 100% authentic, we knew she would be game.”

McEntire read the script, thought it was hilarious, and after a conference call with the creators to talk about specifics, she said yes! She announced her “secret” role on social media on Tuesday (Feb. 16), saying “I’m just a fun-lovin’ water spirit named Trish!“

In an interview with USA Today, McEntire said, “I’m not advertised as being in the movie, it’s been this secret. But afterward my friends were texting me saying, ‘I knew you were going to be Trish.’ That was icing on the cake for me.”

She jokingly added, “I know you’re going to be surprised, but this is the first time I’ve ever played a sea spirit.”

Despite being a commanding presence on set – the director says she yelled “Hey, I’m trying to make a movie over here!’ to boats passing by during her shot – eagle-eyed fans noticed that the film misspelled her name in the credits, which she danced in, by the way!

Just watched the movie. It’s hilarious. However they spelt your name wrong in the credits. pic.twitter.com/k7nmAfPJQv

No one from the film’s production, or Reba herself, have commented on the error. McEntire has already seen the film and said, “Everyone knows somebody like Barb and Star. They’re very real, it’s priceless. I laughed my butt off.”