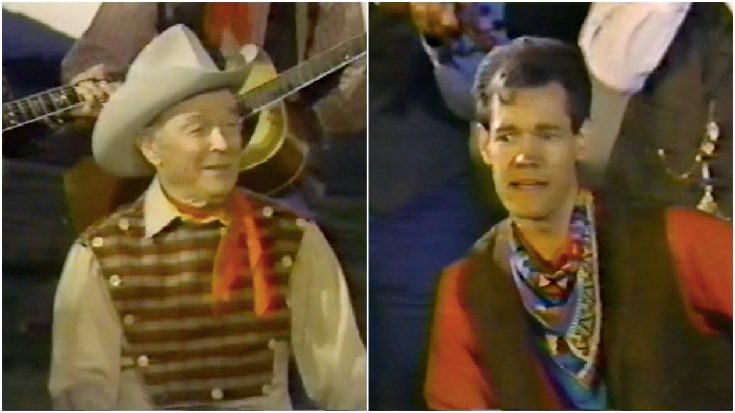 1990 found Randy Travis at the height of his country music career. With hits such as “On the Other Hand,” “Forever and Ever, Amen,” and “I Told You So” among his credits, Travis was riding high. 1990 was also the year that Travis was approached by The Nashville Network (TNN) to headline a television special about a Montana cattle drive.

One of the highlights of the special event, titled “Randy Travis-Happy Trails,” would be when legendary entertainer and real-life cowboy Roy Rogers joined Randy to sing a few songs, including Rogers’ signature song “Happy Trails.” In an interview prior to the airing of the television special, Randy shared how Rogers (then 80-years-old) was as wonderful as he expected him to be.

“To me, Roy was just like I thought he would be,” Travis told Tulsa World. Randy had first met his idol prior to a concert at the Universal Amphitheater in Los Angeles then visited Rogers’ museum in nearby Apple Valley.

“I reached out to shake his hand, and he grabbed me and hugged me and said `Great to meet you.’ I said `Great to meet YOU,” Travis recalled at the time. “He was somebody that I grew up with. He was a hero to me and a lot of other people, too. He’s funny, very witty, a pleasure to be around. He was just like I thought he would be and that always make you feel good, when it’s somebody you admire so much.”

The common admiration between Roy Rogers and Randy Travis is evident in the archived footage of the pair sitting around a campfire singing. They performed three songs total, but it was the closing tune, “Happy Trails,” that gave us all the feels. “‘Happy Trails” was the signature song for Rogers and his wife, Dale Evans Rogers, and was used as the theme song for the 1940s and 1950s radio show and 1950s television show in which they starred.