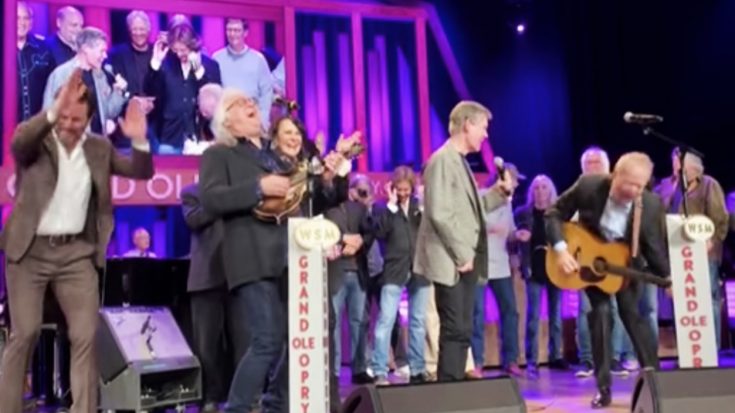 To celebrate his 60th birthday in 2019, country legend Randy Travis had a party that he will never forget in one of the most legendary places in country music history – the Grand Ole Opry.

The Opry shared their excitement for the celebration on Instagram on May 2, 2020, writing, “Our love is deeper than the holler. ♥️ Can’t wait to celebrate [Randy Travis’] 60th birthday on the Saturday Night #Opry.”

Our love is deeper than the holler. ♥️ Can’t wait to celebrate @therandytravis’ 60th birthday on the Saturday Night #Opry! #TBT

It wouldn’t be a party without some of his most famous friends. Country Music Hall of Famer Don Schlitz, Nashville star Charles Esten, Josh Turner, and Charlie Worsham were some of the notable names at the celebration.

Artists that weren’t able to attend sent special video messages, like Carrie Underwood, who just kicked off her massive tour.

“Hey, Randy! Carrie here, happy birthday! Happy 60th birthday, you know I absolutely love you. I adore you as an artist, as a human. You’re such an inspiration to me and so many others. So I just hope you have the best birthday ever because you deserve it, happy birthday,” she said.

So much love for Randy Travis on his birthday, especially from his dear friend Carrie Underwood! ❤️

Underwood’s love and respect for the legend is longstanding, as she recorded his iconic song “I Told You So” for her 2007 album Carnival Ride. It was so well-received that the two released a duet version, which won them a Grammy for Best Country Collaboration with Vocals at the 52nd Grammy Awards in 2010.

The night ended with everyone coming on stage to sing Travis’ 1987 hit “Forever and Ever, Amen,” even Travis himself!

As everyone, including Hall of Famer Ricky Skaggs, sang the tune, Travis and his wife Mary walked to center stage. When it came time, everyone let Travis take the spotlight to sing the very last “Amen” of the song.

As he did, the entire room erupted in applause! Travis had the biggest smile on his face throughout the entire evening, but especially when he went on stage with all his friends.

Watch that special moment in the video below.