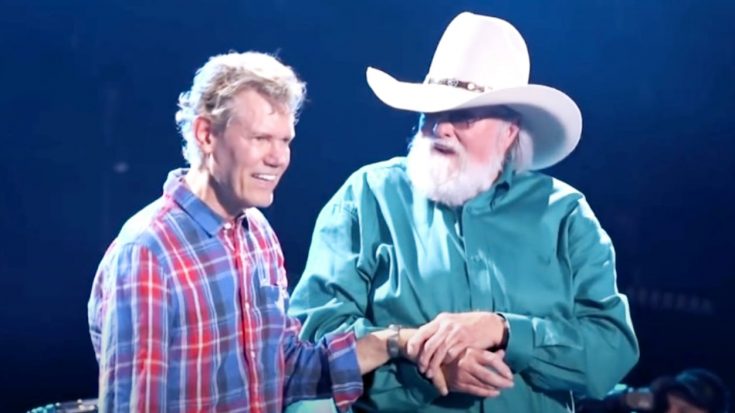 Country music legend Charlie Daniels unexpectedly passed away on July 6, 2020 at the age of 83. Since he was such an influential artist, his death was mourned by country singers of all ages.

Once person who was especially devastated to learn about Charlie’s death was Randy Travis. He and Charlie were close friends, and were both inducted into the Country Music Hall of Fame in 2016.

“Not only was he a gift to us, but to the entire world…The memories go on and on, so I’ll leave it at this — Charlie, thank you for everything you’ve done for me, your endless support of us, your unconditional love, and the sweet memories,” Randy said. “It is my greatest honor to be your Country Music Hall of Fame classmate–you will live on forever as my hero… my friend. I love you.”

Randy shared his message alongside a video of him and Charlie praying together.

Following Charlie’s death, Randy and his wife, Mary, sent three wooden crosses to Charlie’s family. The crosses were in reference to Randy’s meaningful song, “Three Wooden Crosses,” which was released in 2002.

Charlie’s team shared a photo of the crosses on the Charlie Daniels Band Facebook page, and thanked Randy and Mary for their kindness.

Now, a year has passed since Charlie’s death, and Randy still misses him terribly.

Randy poured his emotions into a tribute he wrote in honor of Charlie on the one-year anniversary of his passing. Along with the written tribute, he shared a photo of him and Charlie taken when they were named as inductees into the CMHOF:

“Can’t believe it’s been a year since we lost The Charlie Daniels Band – one of the sweetest souls to ever have graced my life,” Randy said. “Thank you for your friendship, brother. I’ll love you forever and ever.”

You can read Randy’s tribute post and see the photo he shared below.

Like Randy, we too miss having Charlie in the world. He’s so dearly missed.