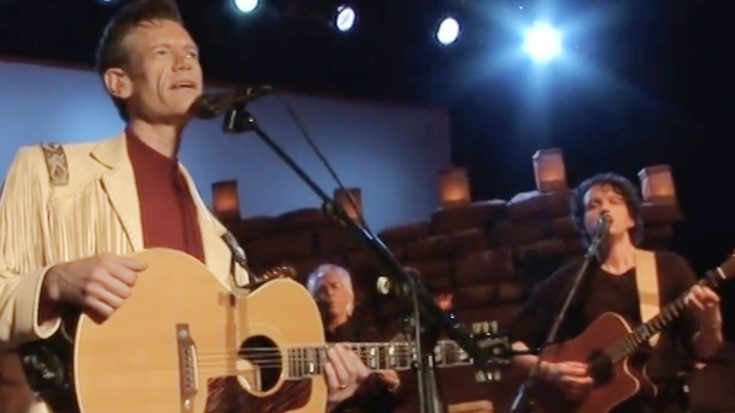 On Tuesday (March 17), country legend Randy Travis took to social media to share some terribly sad news with his fans – his longtime guitarist and someone he considered a “brother,” had passed away.

“My Brother… My Friend — Robb Houston,” he wrote. “After losing his battle to ALS, we know he rests now in the arms of our Lord, so it is with Blessed Assurance that we pray him back home. Robb was a part of our band’s family for many years—a great guitarist who never hit a bad note, a back-up singer of perfection, an accountable workout buddy, and a loyal friend to the end.”

Randy continued, “He always had a smile to share and a joke to tell. His sense of humor lightened our load and created an energy for us all, on the road. Robb will be sorely missed—with sadness we say goodbye for now and with gratitude we thank him for leaving behind all that he did. He marked our hearts—rest peacefully my brother…my friend—I love you.”

On Facebook, Randy shared a “Day In The Life” video Robb made while on the road with him many years ago.

My Brother… My Friend — Robb Houston. After losing his battle to ALS, we know he rests now in the arms of our Lord, so…

Robb had been battling ALS for some time and documented some of it on his Facebook page. His latest update about the disease was on January 18, and he wrote that he had “atrophy in the hands and swelling in the feet.”

Robb not only toured with Randy, he’s also played with acts who have opened for George Jones, Reba McEntire, Diamond Rio, and many others.

When speaking with Country Rebel, Randy’s wife Mary spoke about Robb’s passing, saying, “Robb was the youngest member of the band. Robb and Randy used to work out every day when we were on the road. They were the two most fit, they’d work out, they’d run, they’d lift. For Randy to have his massive stroke and for Robb to have gotten ALS and passed so swiftly, you just don’t know.”

Randy chimed in, agreeing with his wife when she said, “Robb was a sweet, sweet man, always made us laugh.”

Mary added, “He’s one that ‘Three Wooden Crosses’ may have been written about, which is ‘it’s not what you take when you leave this world behind you, it’s what you leave behind you when you go.'”

Robb is survived by his wife Spring, his parents James and Deana, and his brother James Jr. Our thoughts and prayers go out to them, his music family, his friends, and his fans.