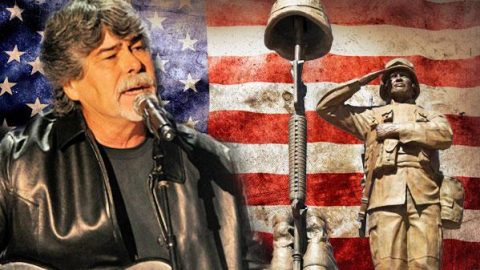 During Alabama’s 2013 Back To The Bowery Tour, lead singer Randy Owen brought a woman on stage who had lost her husband in Afghanistan. Randy got so emotional during this that it was difficult for him to even speak.

Through choked back tears, the singer said to widowed Heather Barton, “I want to tell you what an honor it is for us to be able to play for you.”

Randy gave Barton a chance to say a few words as well. She spoke into the mic, saying, “Freedom ain’t free, you guys. Support our troops because you never know what’s going to happen. Pray for them.”

Barton’s father made this moment possible for her, alerting the band that she would be there and that she was the widow of PFC Christopher Ryan Barton. Randy then sent Heather backstage, saying his wife had something for her.

After a moment of silence, Randy began the hit Alabama song, “Angels Among Us,” the perfect ending to such an emotional moment that will pull at your heartstrings.

God bless our troops and all the sacrifices they and their loved ones make for our nation’s freedoms.