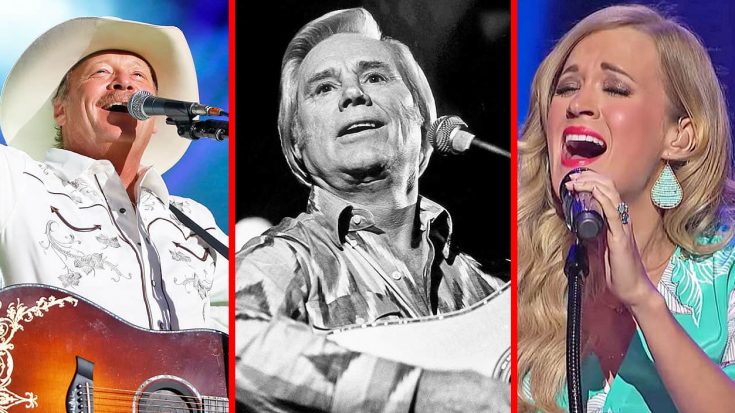 It’s a song that we all learn the words to at a very young age. We’ve heard our National Anthem many times throughout our lives, but for some reason, we can’t get enough.

Over the years, we have seen countless country artists sing the “Star-Spangled Banner” and we tried to narrow this list to a smaller number, but it really is impossible. Each performance is incredible, riveting, and patriotic.

Let’s take a look at the top 15 country artists who have performed the National Anthem.

In 2008, the legendary Hank Williams Jr. performed “The Star-Spangled Banner” at a rally for Sarah Palin. He removed his signature hat to do the honors and had the whole crowd singing along.

The American Idol winner sang the National Anthem before an NFL game played by his beloved New England Patriots in January 2016. How do y’all think he did?

Singing without his bandmate Kix Brooks, Ronnie Dunn performed The National Anthem before Game Three of the World Series in 2011. A proud Texan, this choice made sense since the Texas Rangers were hosting! Say it with us: Play ball!

The “Devil Went Down To Georgia” singer removed his famous 10 gallon hat to sing “The Star-Spangled Banner” at the Tennessee Titans-Jacksonville Jaguars game in 2013.

Okay, okay. We know she’s not country, but she’s pretty darn close, and plus, Reba McEntire is her former mother-in-law! Also, her performance was incredible! Watch her belt out our nation’s anthem in the video above.

John Denver performed The National Anthem at the Heartland Heroes Victory celebration in Omaha, Nebraska on July 3, 1991. A fan in attendance said it was a “magical evening”, and this was a magical performance.

Bryan’s 2014 That’s My Kind of Night tour happened to stop by Madison Square Garden in New York City just a couple days after the 12th anniversary of the 9/11 attacks. It was only right to sing The National Anthem. Bryan and his opener, Lee Brice, removed their hats and belted it out.

9. Luke Bryan by himself

Bryan had to honors of singing the national anthem before Super Bowl LI in 2017. He chose to sing the song a cappella, with no backing music and it was a decision that paid off. No matter what kind of music football fans liked, everyone said they enjoyed his version, which stayed very true to the classic.

Vince Gill was joined by his daughters, Jenny and Corrina, to sing The National Anthem before the a Nashville Predators Stanley Cup Playoff game at the Bridgestone Arena. What a great job they did! See for yourself below.

Check out the above video of a young Reba singing “The Star-Spangled Banner” at the NFR Rodeo in Oklahoma City. Do you expect anything less than amazing? The clip was shown at the CMT Giants TV special honoring the red-headed beauty.

Just two months before he passed away from a heart attack, Roy Orbison delivered a masterful National Anthem performance at the LA Kings hockey game on October 6, 1988.

In 2003, Dolly Parton released a full-length album called For God and Country featuring spiritual and patriotic songs. One of those songs was “The Star-Spangled Banner” and she did a wonderful job.

Faith Hill belted The National Anthem before kickoff at Super Bowl XXXIV between the St. Louis Rams and the Tennessee Titans in 2000.

Watch the beautiful performance below, accompanied by ASL translators and an incredible marching band.

Carrie Underwood was the first of many surprises during the Nashville Predator’s Stanley Cup Playoff run. No one knew she would be singing The National Anthem before the NHL team’s first home game in the playoffs. Since her husband is the captain of the team, and she is a country music superstar, the Preds organization figured it was a no brainer to bring her in!

In 2015, country legend Alan Jackson released a three-disc box set titled Genuine: The Alan Jackson Story. On it included his biggest hits and his most memorable songs. He also included a recording of him singing “The Star-Spangled Banner.”

His version is about as classic as they come and you will enjoy it from start to finish. Listen to it below.

No one can sing this song quite like The Possum! Enjoy his version of The National Anthem below.

Which country singer would have added to this list? And which did the best? Let us know! e