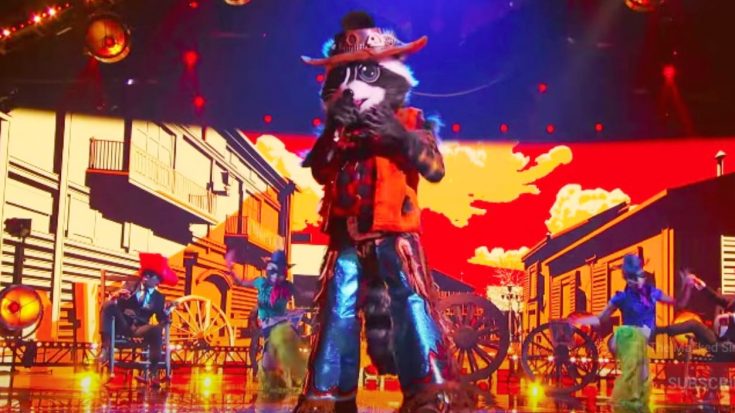 SPOILERS BELOW FOR THE MARCH 24 EPISODE OF THE MASKED SINGER

Every now and then, a contestant on The Masked Singer will pick a country song to perform. Based on his costume, it made sense why the Raccoon was one country-singing contestant during Season 5.

The Raccoon was dressed like a full-on cowboy, with his costume including a large belt buckle and a cowboy hat. That’s why it came as a surprise when he delivered a cover of The Troggs’ “Wild Thing” for his first performance.

The raccoon got the chance to take to the stage again on the episode that aired on Wednesday night (March 24). This time, he picked a song that seemed fitting for him based on his cowboy-themed attire.

Raccoon chose to perform Johnny Cash‘s iconic hit, “Ring of Fire.” The song gave Raccoon the chance to showcase his naturally rough and gravelly voice, and he seemed to have a fun time on stage.

But the judges decided to eliminate Raccoon after his performance, which meant he was unmasked. After he jokingly acted as though he was going to remove his pants, the Raccoon took off his mask to finally reveal his identity.

It turns out the Raccoon was none other than actor and restaurateur Danny Trejo!

After Trejo was unmasked, he said “I feel like a winner, I don’t care, I love it!” He also said he thought he made a cute Raccoon, and the judges agreed.

Even though Trejo was eliminated fairly early in the competition, it seems like he had a fun time! Tune in below to watch his final performance as the Raccoon when he sang “Ring of Fire.”