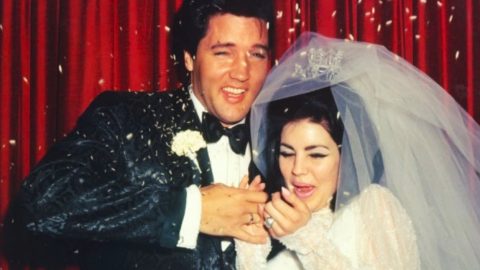 In real life, Elvis and Priscilla married in Las Vegas on May 1, 1967. The couple shared one daughter, Lisa Marie, who was born on February 1, 1968.

Although they were no longer married at the time, Priscilla was heartbroken. She has worked to keep Elvis’ legacy alive through a variety of projects, most notably by opening up his Graceland estate to the public.

Priscilla has also thrown her full support behind the new Elvis movie. So she was surely touched to see the recreated version of her wedding dress that was used in the film.

“We had detailed photos from the archive of what the lace looked like, and we bought several different laces that were all lovingly sewn together to re-create the look as closely as possible. It was entirely hand-beaded and pearled and had several layers of chiffon with a silk underlining. A tulle border was hand-sewn on the hem so that it floated perfectly when Priscilla walked. The top part of the dress is so intricate and the bottom so simple and effortless. Sometimes, those things are the most difficult to do, especially in white or in bridal, because they end up feeling worked over and too touched.”

Olivia was in awe of the gown when she tried it on for her first fitting. Catherine was equally mesmerized by how beautiful the gown looked once Olivia was wearing it in character as Priscilla.

“It was a pleasure to see all this beautiful handwork on Olivia’s live physique. It was ethereal and otherworldly,” Catherine said.

Check out the video below to see what Priscilla’s wedding dress looked like in real life.