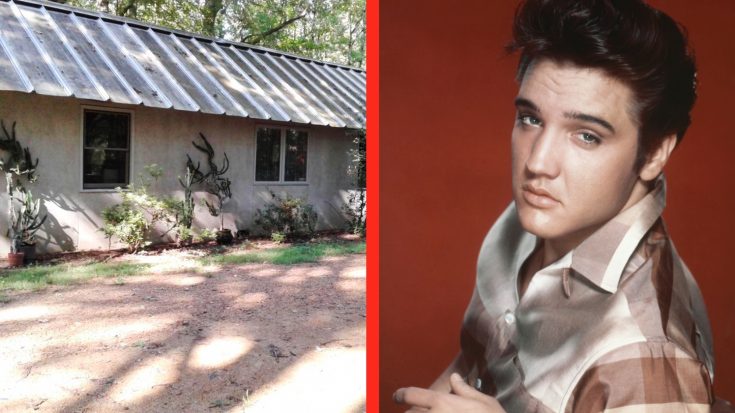 Most people in the world know about Elvis Presley’s most-famous home in Memphis: Graceland. But that expansive estate is just one of a slew of properties that The King owned throughout his short lifetime.

But what many, and likely nobody, knew was that the Presley family owned a sizeable plot of land out in Coldwater, Mississippi. Purchased by Elvis Presley but titled in his father, Vernon’s, name, this chunk of land has now been listed for $485,000 according to Realtor.com.

Listed by local agent Brandie Todd, she noticed something peculiar when examining the legal deed and title documents for the property.

“It occurred to me that this piece of land might have belonged to the Presley family in some way,” Todd explained to the site.

This plot of land holds 33 acres and has a two-bedroom house, barn, workshop, a wide-ranging wooded area and even a busted up 1955 Buick that Elvis was rumored to use for target practice.

“The rumor is that Elvis used to come out to the property and shoot at the car,” Todd said. “He had a thing for shooting.”

But local rock and roll shopkeeper and hardcore Elvis historian, Stephen Shutts says that the rumor is unlikely to be true.

“The car probably belonged to Gladys’ family. Elvis was known for giving away cars, but he gave away new ones,” Shutts said. “He came into money around 1957, and this car is a ‘55. He wouldn’t have given a used car to someone.”

This specific plot of land was purchased under Vernon Presley’s name in 1965. He then quitclaimed the property over to Johnnie & Lois Smith who were his wife’s brother and sister-in-law.

“There are a few of us diehards that know Elvis inside and out…And nobody knew about this one. Nobody.”

What happened was that Johnnie probably needed money, so Vernon went to Elvis to ask about purchasing the property, and Elvis likely said it was fine,” Shutts told the website.

“The property was purchased in Vernon’s name and then given to Johnnie, true. It wouldn’t have been put in Elvis’ name because of business reasons—or potentially, tax or financial reasons as well. But it was Elvis who purchased the property. It was his money that was used.”

For many years, the land was owned by relatives of Presley until they sold it to a ranch hand at Elvis’ famous Circle G Ranch. His name was William “Mike” McGregor.

Check out a few of the pictures from the listing below.