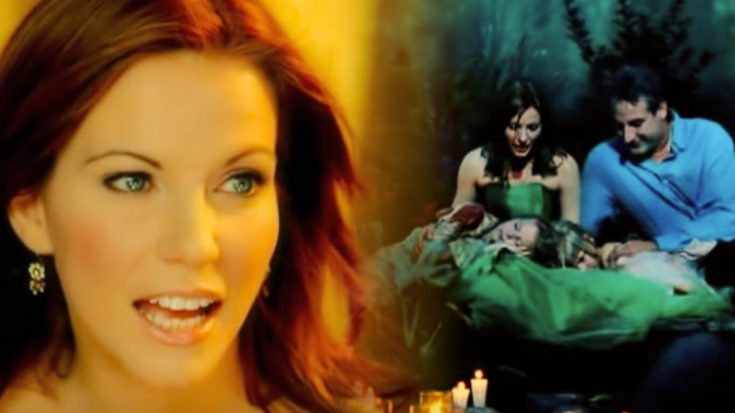 A Song To Warm The Heart

Martina McBride has provided us with many heartwarming songs over the years, but none more so than 2001’s “Blessed.”

Released as the second single off of her Greatest Hits album, “Blessed” was a number one country hit. It also managed to cross over to the pop chart, where it peaked at the 31st spot.

Written by Brett James, Hillary Lindsey, and Troy Verges, “Blessed” serves as Martina’s way of expressing her thankfulness for the wonderful things and people in her life. Knowing that her life is full of blessings, she thanks God every day for everything he’s given to her.

The song’s heartfelt message was further expressed through its music video. Directed by Deaton Flanigen, the video shows Martina in an almost fairytale-like woodland setting.

Wearing a beautiful gown, Martina stands on a small dock overlooking a pond. With flowers and brightly-colored trees surrounding her, Martina sings about all of the beauty she finds in being so “blessed” in life.

Although Martina didn’t write “Blessed,” the song seemed like the perfect fit for her. Troy said they had her in mind when they wrote it, telling 94.9 Star Country,“We wrote it for Martina, then we pitched it to her – and it ended up with her.”

Since Martina felt such a strong connection to “Blessed,” it’s no surprise that she added a personal element to the music video.

Her husband and two daughters, Delaney and Emma, can be seen in the clip. Her youngest daughter, Ava, was born four years later in 2005.

We’re sure that may be hard for some of you to believe, since Delaney and Emma were just little girls when they were in the music video for “Blessed.”

You can watch them sweetly interact with their mother and father in the “Blessed” video below. This clip will always touch our hearts, no matter how many times we watch it.