Marie Osmond Says ’15 Tumors’ Caused Her To Faint On ‘DWTS’ 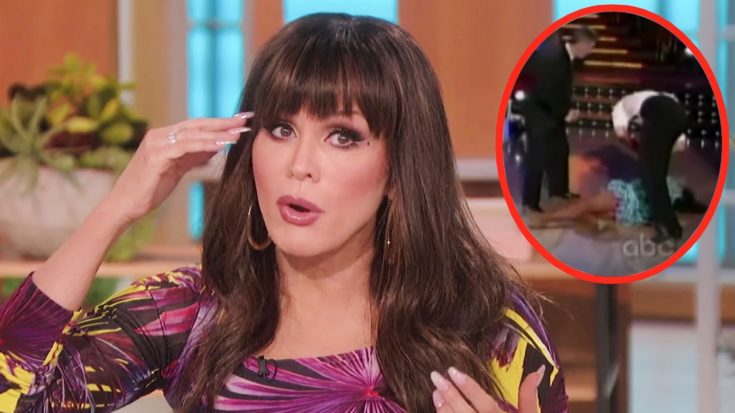 On a September 2019 episode of The Talk, the co-hosts were talking about the previous night’s Dancing With The Stars premiere. Seeing as DWTS judge Carrie Ann Inaba and former contestant Marie Osmond are co-hosts, they have a lot of insider information!

They brought up talk show host Wendy Williams’ criticism of Christie Brinkley’s daughter Sailor Brinkley-Cook replacing her at the last second. It was announced earlier in the day that Christie would be backing out of the competition because she “shattered” her wrist and needed surgery.

Good Morning America shared the footage of the injury, which looked to be pretty painful. Right after it happened, Christie knew she’d broken her wrist.

EXCLUSIVE ballroom bombshell! @SeaBrinkley is out of @DancingABC before the season begins. She tells @Ginger_Zee about her injury and the moment she called her daughter Sailor to ask her to step in for mom coming up on @GMA! #DWTS https://t.co/vCu1GI9DWR pic.twitter.com/SBDoWy84Aq

Wendy said the injury “looked fake as hell” and accused the supermodel of faking the injury to get her daughter on the show to gain exposure.

“Let me tell you what I see. I don’t see a wrist and a shoulder being fractured. But that was real cute,” Wendy said. “Here’s my thought: Dancing with the Stars called Christie Brinkley … and she said yes. After she got off the phone, that’s when she plotted her schedule. … In my opinion, I think what Christie did was she signed up for Dancing with the Stars knowing that she’d put her daughter Sailor in there.”

Someone who can relate to having health issues on DWTS is Marie Osmond. She famously fainted while the judges were giving her critiques when she competed on Season 5 in 2007 after dancing the samba.

For years, she has always maintained that she “forgot to breathe,” but on the episode of The Talk, she revealed what really happened – she had 15 tumors.

“When I fainted, yes, everybody said it was manufactured… When I was accused of faking it, what happened, and I never told anyone, they found out that all of my filings from my childhood were poisoning me,” she said. “My entire jaw was full of poison… but what’s crazy is it manifested downward [in my body]. I removed 15 tumors. And they said it was a miracle that it didn’t go up, but when I would pass out, it would just trickle up into my brain a little bit, and that’s why I was passing out, so it was legit.”

She continued saying she had “great empathy” for Christie amid this Wendy Williams drama because she knows what kind of terrible things people can assume and say.

Watch Marie talk about it in the video below.