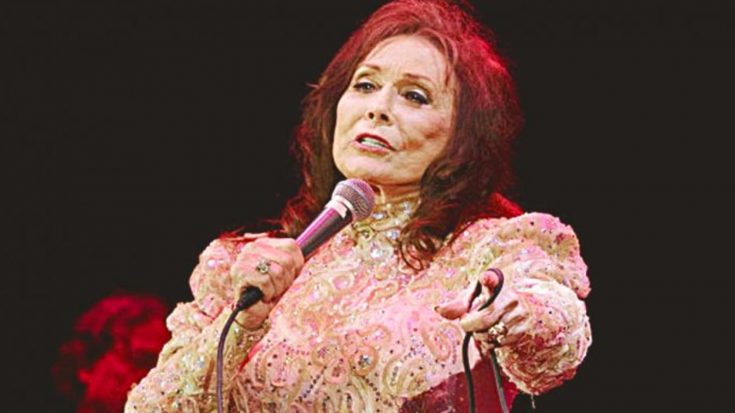 With a career spanning across six decades, Loretta Lynn has watched country music go through many transformations. But she made it clear she isn’t a fan of the direction it’s gone in more recent years.

Martina McBride spoke with Lynn on her podcast, Vocal Point, and the topic of today’s country music came up. McBride asked Lynn what she thought of where country music has gone in recent years, and Lynn didn’t mince words.

McBride could tell Lynn was upset, and noted she seemed “mad” about the way country music sounds these days. Lynn confirmed it does make her angry, saying, “Yeah. I’m getting made about it. I am. Because it’s ridiculous.”

The 87-year-old country legend made her feelings all the more evident, saying, “I’m not happy at all.”

She then doubled down on her comments about believing that country music is a dead genre:

“I think that they’re completely losing it,” she said. “And I think that’s a sad situation because we should never let country music die. I think that every type of music should be saved, and country is one of the greatest. It’s been around, as far as I’m concerned, longer than any of it.”

Here’s the inside scoop on my time at #cmaawards #linkinbio

Since suffering a stroke in 2017 and a fall in 2018, Lynn has been unable to deliver many performances. But she continues to release new albums, including 2018’s Wouldn’t It Be Great.

She also celebrated her 87th birthday last year with a huge birthday bash. Artists from the classical and traditional eras performed at the party, including Alan Jackson, Lee Ann Womack, and McBride.

Despite Lynn’s criticisms, there are modern artists she supports. She has performed with Kacey Musgraves, has praised Miranda Lambert, and said she dreamed of having Keith Urban hop out of her 87th birthday cake.

Urban made that dream come true at Lynn’s birthday bash last year. Tune in to the video below to see him surprise Lynn with his appearance!

What do y’all think of Lynn’s comments on today’s country music? Do you agree with her?